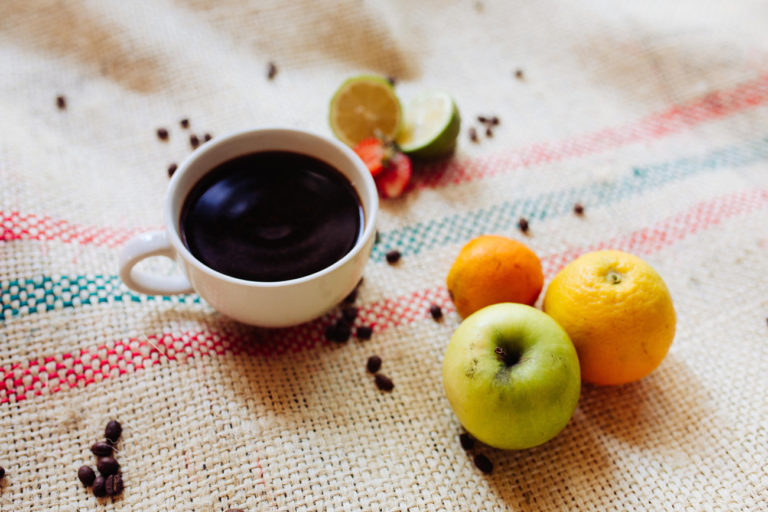 I don’t think there is a better way to get to understand coffee acidity than to taste fruits( and other foods) that contain the same acids prominent in most high grade specialty coffees.

This workshop was divided into 4 segments with a total duration of 1 hour. We had a full house with this one- 12 sign ups.

So for those who missed it, below is a breakdown of the two areas I touched on most in the workshop.

An acid will increase the number of hydrogen ions in a solution, and can be measured by using a pH analyser ( or strips). Every time you start brewing coffee, the coffee diffuses into the water and increases the hydrogen ion level. The perception of these hydrogen ions by receptors in the mouth creates quite a unique experience. I would describe it as being more like a tingling sensation, rather than an actual taste. Of course, sourness to some degree will be present.

Sour and Salt are different to the other three tastes( Sweet, Bitter and Umami) in that they are simple ions: hydrogen ions (H+) for acidity and, mainly, sodium ions (Na+) for salt. Some researchers have speculated that many cells on the tongue might be able to pick up these signals, relaying this information in a complex pattern of nerve signals to the brain.

The abbreviation- pH is known as power of hydrogen ,or in other circles, potential hydrogen. Coffee has a pH of around 5, which is around the same level of acidity as a banana. By comparison- orange juice is 100 times more acidic than coffee. This should clear up some confusion with those folk who think that coffee is going to burn a whole through their stomach if they drink copious amounts of it. There is another mostly harmless reason for that sensation, for those who do experience it. Perhaps that’s a topic for another day.

Favorable acids give the perception of sourness in a brew, and it is critical in enhancing complexity and structure. It also has a dramatic effect on modulating the brew in general. I would argue, probably more so than any other component of brewed coffee. High quality acidity and a more diverse array of acids are associated with fresh crop coffees( around 4-9 months after harvest).Ever wonder why we keep talking about seasonality? Well now you know.

Why does it matter to you?

Acidity seems to be greatly affected by grind size, water temperature and extraction time. You basically have the power to manipulate any coffee in your possession, by changing these parameters. In the last stretch of the workshop, I gave pointers on which brew methods and parameters to use to emphasize or negate certain acids in a coffee. It sounds like complicated stuff but once you actually start thinking about what you’re drinking and what you’re feeling and tasting, then it all starts to make sense. Below are a few pointers for manipulating acids at home. Remember that, certain coffees will have these acids available to work with and others will not. So the choice of coffee is the key to success.