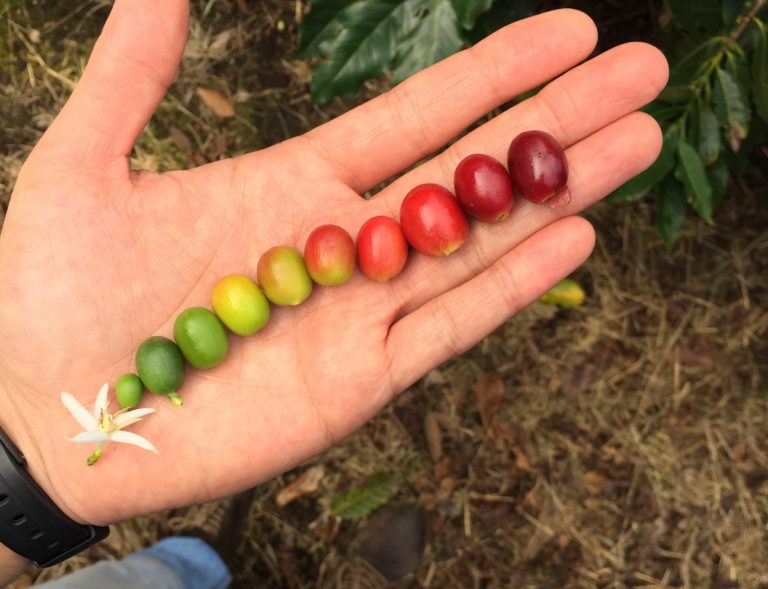 I began imagining my first Origin coffee farm trip during my Barista Course at Origin in 2013. I was so surprised to hear that this bean we use to make coffee is in fact the seed of a fruit. All along I had imagined the “brown coffee beans” dug up from under the ground one by one. This led me to Vimeo and YouTube, relentlessly searching for coffee videos and often coming across magnificent shots of Kenyan coffee farms along the slopes of Mount Kenya or lush green plantations in Brazil. Fast forward four years and I’ve finally embarked on my first Origin farm trip. Not to Kenya or Brazil but much closer to home in a little town called Port Edward, just two hours outside of Durban.

My first morning on the farm began with a personal tour with the farm  owner, Dylan Cumming. I arrived just in time as this would be the last harvest for another 2 weeks to allow more cherries to ripen. Only the ripest cherries are picked each day and allocated to a lot number for that specific day. As we made our way through the farm Dylan explained the strategic growing practices he has put in place to ensure optimum growth for his trees. I tried to relate what he was saying to my knowledge of brewing and extraction and how these practices would affect possible outcomes for this but I quickly found myself trying to play catch up in my mind so I decided to forget about the brewing analysis and rather immerse myself in the beautiful surroundings and this experience and allow Dylan to teach me.

As we made our way through different sections of the farm I noted the physical difference between the trees of different varietals as well as the difference between the Arabica tree and the handful of Robusta trees he had growing. After about ten minutes we had reached the pickers. Each carrying a sling bag which they would use to drop cherries into. This was a surreal experience for me. As a barista I often speak to my customers about the significance of picking only ripe cherries, thinking that this is surely one of the simpler parts of the specialty coffee chain, as if my beautiful latte art held more significance. It’s not as easy as I thought.

The rest of the day comprised of a solo stroll through the plantations, some pulping and fermentation, tasting all the coffees the farm produced and also roasting some SL28 varietal samples from the farm. Not a bad first day.

The second day went by very quickly. I got to spend the morning washing coffee with some of the farm workers. I’m not sure if this is just me but I felt like a different part of my brain had been stimulated when physically taking part in the processing. I had read so much about all of this before but for some reason it started making so much more sense now. I felt as if this was something I would like to experience a lot more often. After this we checked on the coffee that had been fermenting from the day before and then took another stroll through the plantations with Dylan explaining more of the intricate growing methods he has put in place.

The more time I spent walking between the coffee trees the more excited I became to brew coffee again. This time with a renewed sense of purpose. Before lunch we hulled and graded one of the earlier lots of the season. Again, being part of this process was an enlightening experience. After lunch we made more espresso and also cupped the coffee we had roasted the day before. This was a blind tasting and if I did not know the coffees had been roasted on this farm, in South Africa, I would’ve thought it was coffee from Burundi or Uganda. Very interesting.

I was scheduled to leave earlier on the third day but I managed to spend some time with Dylan at the drying beds. He had washed and natural lots drying at the time. Exposed to open sunlight for consistent drying after being covered the day before due to unsuitable weather. This was the perfect way to end my visit. I feel so blessed to have been part of the entire farm chain, roast and also brew coffee, all on the same farm. This was an unforgettable experience.