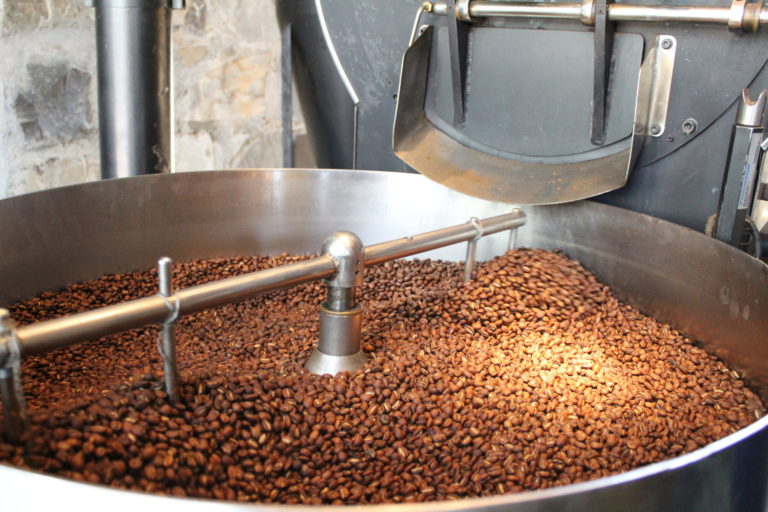 Five hours drive towards the coast from Bangalore lies the small town of Suntikoppa (population of 20,000), among the Coorg Hills of southern India. This is the heart of the coffee growing area in the state of Karnataka and all around lie small- to medium-sized farms. Located at 600-800 metres above sea level in these fertile hills is Faiz Moosakutty’s Bibi Plantation.

The 250 acre plantation has been in the Moosakutty family since 1960 and is named after Faiz’s mother. Faiz took over in 1990 and has since embarked on replanting the entire estate, aiming to create a model coffee farm. This process is now 100% complete and the Bibi Plantation produces some of the region’s finest coffee. Faiz lives on the farm with his wife, Sonia, and two children – Rihan and Tara.

Some 100 people work on the plantation, around half of whom live on site. The farm provides them with free electricity, free housing and free medical assistance. Faiz also offers interest free loans to assist with the education of workers’ children, and pay back schedules are kept flexible and worked out on a case-by-case basis. From the moment that they purchased the farm, the family has worked tirelessly to enable these lands to produce a very special coffee that has been commercialized around the world. They have expanded the area under coffee production, despite the many legal, economic, administrative difficulties they have confronted. They have survived the worst crisis the Mexican coffee sector has experienced (from1991-2003), during which profits from coffee production failed to cover the cost of production.  At Santa Rosa Teocelo, the family and staff remained strong, continuing to provide work for the local population and keeping the farm in the best condition possible. The biggest challenge, today, is to control the impact of coffee leaf rust, which has hit the region very hard.

The goal of the Santa Rosa Teocelo team is to survive the adverse conditions confronting the coffee sector today so that they can continue to be a place of refuge for the biological diversity of the region and continue contributing to the regional economy.

In the future, the farm plans to increase salaries and build better housing for the workers and to provide fully the clothing required for working on the farm. They also have plans to provide medical care for workers. This, of course, is all contingent on the prices they achieve for their coffees, making participation in speciality markets all the more important.

For many, Uganda might not the first country that comes to mind when thinking of high quality Arabica: the country has been traditionally known as a producer of Robusta. However, in many regions of the country the challenges are more a matter of infrastructure, history and knowledge than environment. One such area is the West Nile sub region (previously known as a Province), high in the Northwest of the country, bordering the Democratic Republic of Congo, where Arabica coffee is grown at 1,450 to 1,800 meters above sea level. This region’s ideal natural conditions have the potential to produce stellar speciality coffees and transform the lives of farmers across the region.

The White Nile project gains its name from the famous Murchison Falls (Kalangala in local dialect), which lie only a few kilometres away. It is here that the mighty River Nile squeezes itself into a 7 meter volcanic rock stretch, forming white foam as it proceeds, hence turning into a ‘White’ Nile as it pours into Lake Albert.