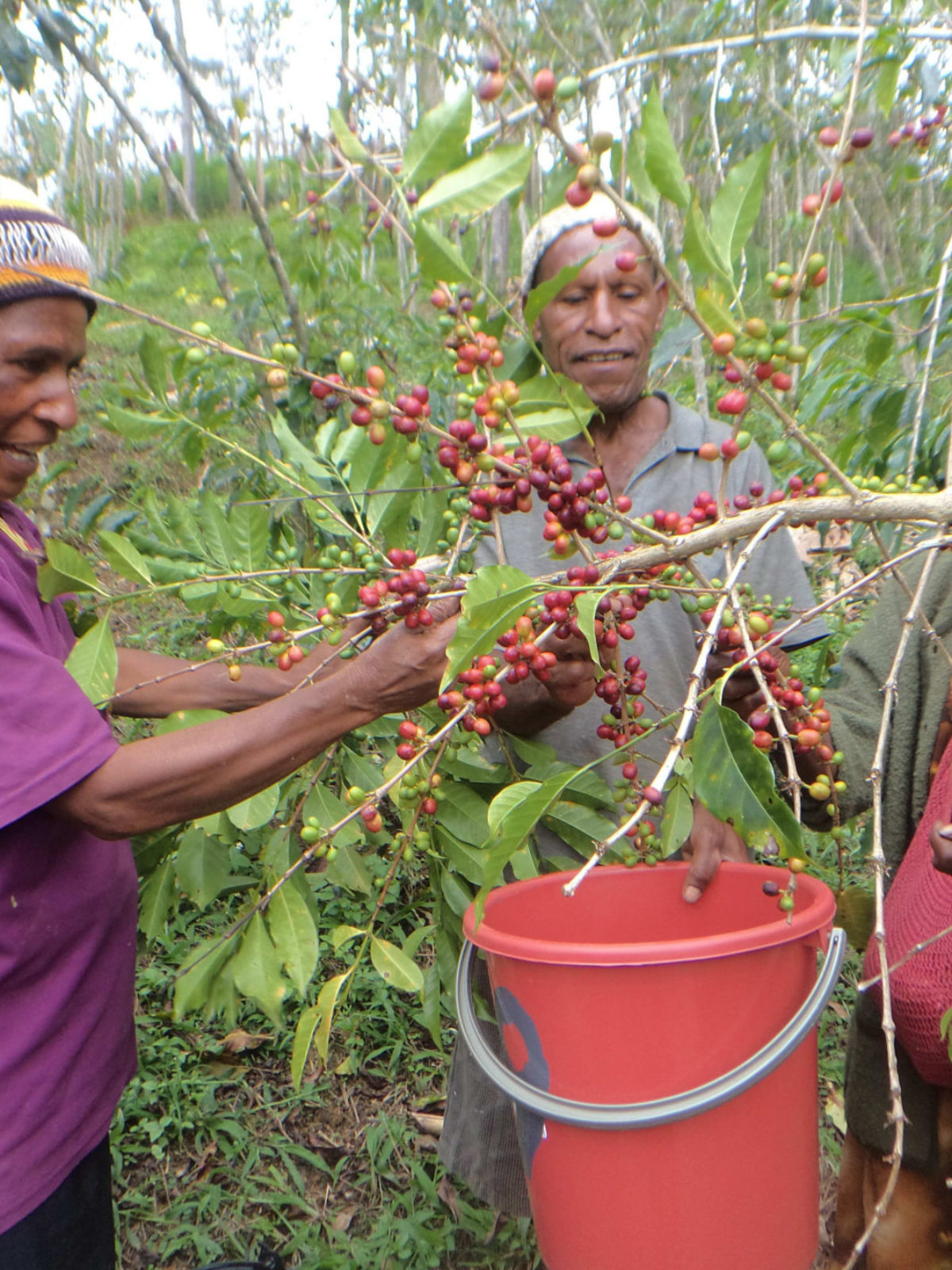 This special lot from Monpi coffee is made entirely from Smallholder farms from Lufa and Okapa Districts. Each lot is sourced by local coffee entrepreneur, Mr Peno Kavori, Monpi’s partner in the region with more than 30 years of experience. From the Tua valley in the north, through the Crater Mountain range, down to the lower Lamari valley in the south, Mr Kavori’s fleet of vehicles helps to source some of the best coffee in the region; paying fair prices and incentivizing local farmers to produce a quality product.

Coffee was initially introduced to Papua New Guinea (PNG) in the late 19th century and is directly linked to the country’s colonial history. Likely, coffee was first grown in PNG by Emma Coe Forsayth: a businesswoman and plantation owner of mixed American and Samoan descent. Emma set up large cocoa and coconut plantations in the Kokopo District in the East New Britain Province (ENBP). It is probable that her vast plantation also included coffee. Today, coffee is a major industry for Papua New Guinea with the country currently exporting around 1 million bags of coffee every year; involving more than 2.5 million people (nearly half of the total population).

This lot takes its name from Districts in which it is grown. Created by blending some of the best lots from Districts Lufa and Okapa, it only seems right to do the same with the name! Both Districts are known for being some of the remotest parts of the Eastern Highlands Province, as well as famed for producing some of the region’s best coffee. Traditionally, these very remote regions are difficult to traverse, meaning many producers would have to carry their crop over long distances to receive factory door prices. This often meant that many producers in the region leaned towards selling their lots for cheap to those willing to transport it to the mill, rather than transporting it themselves for a higher premium. As such, many producers in the region also began to focus less on producing quality coffee. Instead, producers would cut corners, rushing post-harvest processing stages to achieve a quick sale.

In comes Mr Peno Kavori. Focusing solely on sourcing quality coffee, Mr Kavori’s fleet of trucks scour the rough terrain of his supply network; searching for the best lots Lufa and Okapa Districts have to offer. Instead of offering minimum prices for his collection service, Mr Kavori pays factory door prices at collection. This not only means producers are paid fairly for their quality product, but it also helps to incentivize other producers to improve their processing techniques. This business model is made possible by Peno’s dry mill. By vertically integrating the collection of parchment coffee into his business model, Peno can pass premiums onto producers, as well as offer a quality product for export.

Land in PNG is still to this day conventionally owned, with a family farm averaging just 2 hectares. Farming is conducted in a very traditional manner via tried and tested means, often with the use of just organic imputes, due to the expensive nature of synthetic fertilizers. Coffee is inter-cropped with other produce to increase ‘soil humus’ (decaying plant matter that increases retention of moisture and nutrients) and fertility, as well as to provide shade. Crops include; plantain, bananas, yams, sweet potato, cabbage and other traditional foods. Although a large variety of other produce is grown, coffee cultivation is often the primary means of income; with other produce grown and livestock reared for personal consumption. This makes coffee an important cash crop, as most farmers in the Lufa and Okapa Districts will grow coffee for income.

The challenge of collecting cherries in PNG’s difficult terrain

Trucks travel the local villages of Lufa and Okapa daily, purchasing and collecting coffee from smallholder producers. All coffee is purchased as parchment from growers within the Districts, with distances from farm to Mr Peno’s dry mill ranging from 200 meters to almost 100 kilometers. Although Monpi and Mr Kavori are independent of farming practices such as pruning and renovation of trees, Monpi’s sustainability team help to encourage weeding and renovation techniques. These techniques are also reiterated by Mr Kavori and his team, whose price promise continues to incentivise better production methods. These encouragements normally take form between September and November, every year after the main season harvest. This often results in maintenance or structural pruning, as well as drastic renovations such as stumping.

For harvesting, the coffee cherry is selectively handpicked; with producers aiming to only pick ‘full maroon cherries’. Once picked, the cherries are assessed, hand sorting and removing any under/over ripe or defective beans from the quality stock. Next, the coffee cherry is washed and floated in buckets using cool clean water from natural sources to remove any dirt or further defective cherry. Once the water is drained, the coffee cherry will be hand pulped, usually within the first 24 hours of picking. For these smallholder producers, each will have their own hand pulper located on the farm. Next, the pulped coffee cherry is placed into vats for 24-36 hours and left to ferment. Once complete, the coffee is washed again to remove the mucilage residue, completing the fermentation process. Finally, the parchment coffee is removed and taken to the raised beds to dry.

Once placed on the beds, Parchment coffee is first skin dried under shade or lower perforated beds for 2-3days, with no direct sunlight. Here the parchment will be continuously stirred, allowing moisture outside of the bean to be dried by the breeze. The drying beds are often cared for by women of the families, who will hand sort through to remove any further defects. Once the beans reach 12% moisture, the parchment coffee is ready for collection by one of Mr Kavori’s trucks and transported to the dry mill. Once here, the parchment coffee will be graded and milled, ready for export.

Environmental conservation in the region

Producers in the region are fortunate to be situated only a few kilometers from the Crater mountains wildlife management area. In the tri-border area, where the Eastern Highlands, Simbu and Gulf provincial borders meet, is the Crater Mountain Wildlife Management Area (www.rcfpng.org). The area encompasses 2,700 sq. kilometers, ranging from lowland tropical rainforests on the Purari River to alpine grasses on the slopes of Crater Mountain.

As well as outcomes from conservation, positive social impacts continue to be seen across Mr Kavori’s network. Farms rehabilitation to improve crop quality has also led to improvements in the standard of living for many, resulting in many farms building new permanent or semi-permanent houses, as well as beginning to involve themselves in retail businesses. Mr Kavori also continues to offer support directly and has contributed to the building of a number of churches within his network.

Firstly, all of Origin’s decaf are chemical free – typically processed via the CO2 or Mountain-Water process.

Secondly, unlike many other decafs you might encounter, our decafs are made from the same grades of speciality coffee as our caffeinated coffees. In many other cases, decafs you might purchase start as lower grades of green whose flavour is then further degraded by the decaffeination process (the degree to which this happens is dependent on the specific process used).

This results in a significantly better cup than the vast majority other decafs out there.

One of the vital elements and most important compounds of our natural environment is carbon dioxide. It is in the air we breathe, it is the gas that makes mineral water effervescent and, by assimilation, enables plants to grow. It is also a highly selective solvent for caffeine. Based on this phenomenon, CR3 developed its Natural Liquid Carbon Dioxide Coffee Decaffeination Process. In this patented process, the natural carbon dioxide is used under sub-critical conditions, i.e. in a liquid state at low temperature and pressure (relative to the supercritical process). These particularly gentle process parameters, together with the good caffeine selectivity of CO2, guarantee a high retention rate of the coffee components responsible for aroma and taste. The process can be described in detail as follows:

The raw, unroasted coffee is moistened with water and put into a vessel where it is brought into contact with pressurised, liquid carbon dioxide. By circulation through the coffee, the carbon dioxide draws the caffeine out of the bean. In an evaporator, the caffeine precipitates out from the CO2 which, after evaporation and re-condensation, is pumped again into the vessel containing the coffee for a new cycle.

When the required residual caffeine level is reached, the CO2 circulation is stopped and the coffee is discharged into a drier where it is gently dried until it reaches the original moisture content. The coffee is then ready for roasting.