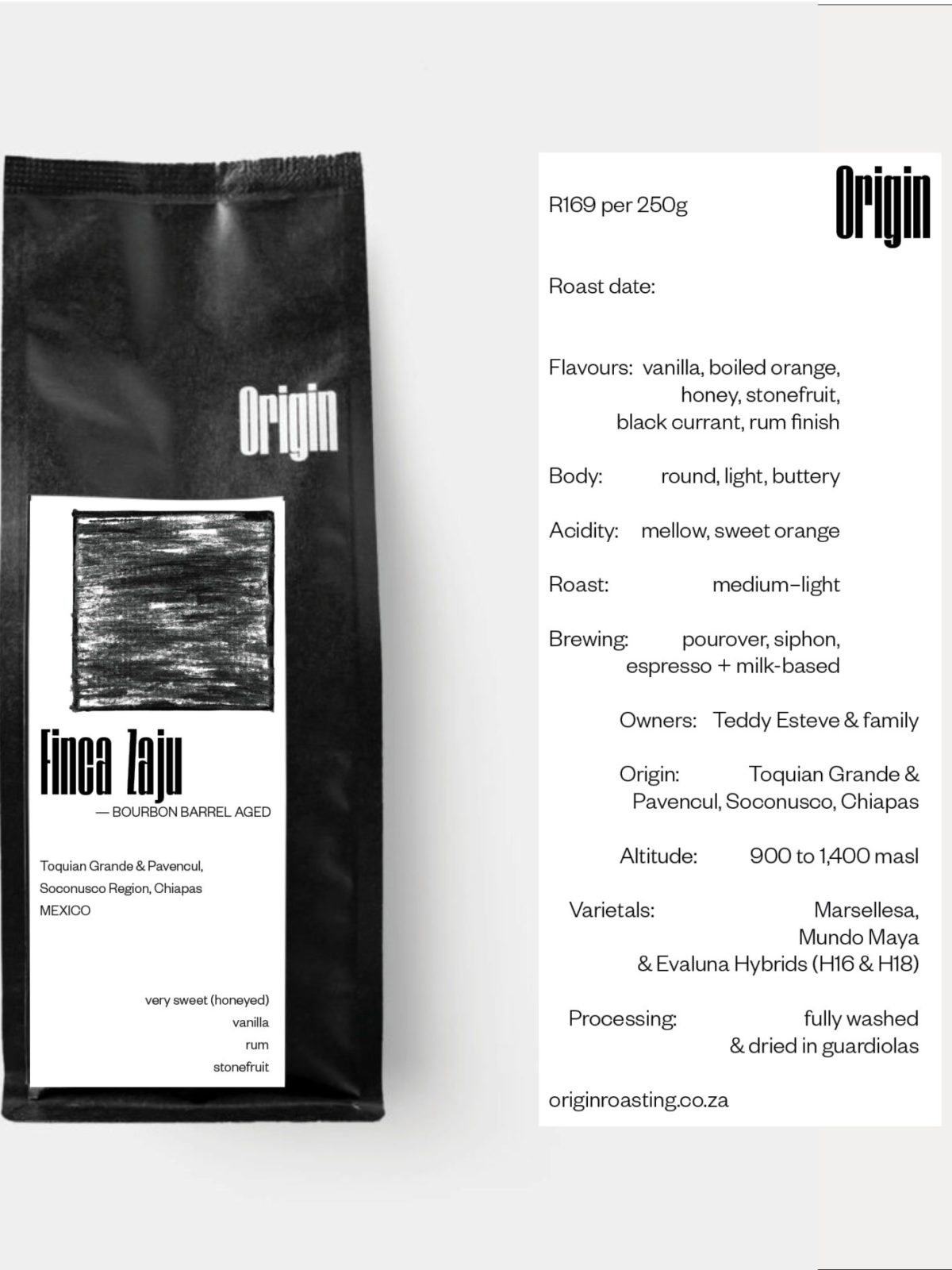 The team at Guadalupe Zaju came up with this innovative concept in seeking to develop a new product that would emphasise the complex and intrinsic characteristics of the coffee bean itself. Barrel Aging as a process is a relatively quick method of enhancing the flavour profile of the coffee without damaging the bean structure and with minimal risk to negative characteristics. Addingin the factor of wooden barrels, you are into a whole new category of processing and potential in the coffee.

This nano lot of Guadalupe Zaju has been barrel aged in whisky barrels re-purposed from the Brown Forman Group, whose famous bourbon brands include Jack Daniels, Gentleman Jack and Woodford Reserve. The coffee is aged, in parchment, in these barrels for three weeks, and the result is a complex, and unique brew.

Take advantage of us having lots of both normal washed process and of this bourbon barrel aged version to cross-taste them.

All coffees contributing to this lot are Marsellesa or Hybrid varietals. Marsellesa is a variety obtained from the hybridization of Sarchimor and Caturra. It is sought after for its superior cup quality and its resistance to leaf rust. Mundo Maya (H16 / EC16) is an F1 hybrid from a cross between T5296, a rust-resistant descendant of the Timor Hybrid, and a wild Ethiopian accession “ET01″. The variety is high yielding when planted in healthy soil, with very good quality at elevations above 1,300 metres above sea level. Evaluna (H18 / EC18) is an F1 hybrid from a cross between rust-resistant Naryelis (a Catimor-type variety) and an Ethiopian landrace accession “ET06“. It is a very high yielding variety at high altitudes. Both Hybrids were developed and distributed by CIRAD & ECOM in the mid-2000s and compose a significant portion of Guadalupe Zaju’s plantations, as they are rust resistant while also displaying exceptional cup profiles.

Lots selected to be barrel aged were selected based on a score of 83+, with fruit and wine profiles. These selected lots were then blended to balance the cup and aged in parchment barrels to contribute the heady aroma of Bourbon.

The Farm, Its History and Its Region

Beautiful Finca Guadalupe Zaju occupies 310 hectares right on Chiapas, Mexico’s famed ‘Ruta de Cafe’. This ‘Route of Coffee’ rides along the Guatemalan border, north from the border town of Tapachula, through Mexico’s famed Soconusco region. The route flows past some of Mexico’s most famous farms – including the Fincas Hamburgo and Irlanda. A neighbour of these farms, Guadalupe Zaju is well on its way to helping carry on the region’s (somewhat diminished in recent years) reputation as a location for high quality coffee.

The Soconusco region is one of Mexico’s most famous coffee locales. Founded in 1890, the region was established by Porfirio Díaz (Mexico’s then President) and Otto von Bismarck, who together collaborated to send 450 German families to an underdeveloped region near Tapachula, bordering Guatemala at Mexico’s southern tip. The region had great agricultural potential, thought Díaz – but the area was remote and lacked investment. Under the careful management of the German immigrants and with the great effort of local farmers and workers, Soconusco was transformed into coffee powerhouse! Between 1895 and 1900, 11.5 million kg of coffee was harvested – some 70% of which went directly to Germany.

Guadalupe Zaju was taken over in 1945 by Hamburg-born businessman Hans Asmus Luethje and his Peruvian wife. She was actually Mexican but the fact that she was born on the neighboring farm “Peru” made her “Peruvian”. Their son Juan Luethje carried on the legacy. The farm was originally known simply as Zajú – named after the river that runs through it: Guadalupe was added only when the Virgin of Guadalupe icon was introduced to the farm’s chapel. The Luethje family ran the farm for more than 50 years with dedication; however, in the latter part of that century, low coffee prices challenged the farm’s economic viability. The farm was sold when coffee prices hit rock bottom in 2003.

When Guadalupe Zaju’s current owner, Eduardo ‘Teddy’ Esteve, purchased the farm in 2004, it was a true act of faith and commitment to making the formerly great farm into a bastion of quality again. Teddy’s family had been involved in commodity trading – including coffee, tea and cocoa – for over 150 years, and he had worked on the coffee end of the business for his whole life. In his own words, he says “I grew up cleaning up the cupping room in the office and being involved in clerical matters since my early days to complement my allowance.” He directly started working for the family company in 1983. However, he had never directly been involved in farming coffee.

After purchasing Guadalupe Zaju, Teddy purchased two neighbouring farms – La Gloria and Chanjul – in 2011, all of which are run, today, under the name of Guadalupe Zaju. Currently, only 350 hectares of the farm’s total 600 hectares are under coffee. Teddy has set about expanding the area under coffee – mostly with resistant varieties that, nonetheless, offer a great cup (such as Marsellesa and various Hybrids). Maintaining forestland is a commitment, however, and it is almost certain that a good portion of the farm will remain forested.

Teddy has complemented his passion for coffee farming by surrounding himself with experts. All of this is to ensure that Guadalupe Zaju establishes a name for itself as a producer of high quality coffee.

Working with a Team of Experts

This team of experts and the passion with which Teddy approaches his role as a coffee producer have paid off. Guadalupe Zaju’s yields are unusually high for a Mexican farm. At 20-25 quintales (approx. 60 kg sacks of pergamino) per hectare, they are around double the average for Chiapas. These yields are achieved due to a strict regimen, intelligent fertilisation schedule and regular pruning and renovation. They have also renovated many areas where the older Caturra and Catuai plants have become diseased or non-productive, replacing these plants with Marsellesa and Hibrido (developed by CIRAD & ECOM). As the farm’s Marsellesa begin full production they expect yields will increase to up to 30 quintales per hectare.

The coffee at Guadalupe Zaju is 100% shade grown (in fact, the farm is Rainforest Alliance, Utz AND Cafe Practices certified). Shade is well-managed and designed to be multi-purpose. Magnolia from Guatemala has been selected due to the fact that it is evergreen and has less leaf fall. Even more importantly, it is a sturdy tree with a relatively high canopy. The area is known for being windy (high winds in of 2008’s Tropical Storm Odile almost ripped the entire harvest away). Magnolia can withstand high winds and help protect the vulnerable coffee trees below. Shade trees are also selected for their ability to control pests. Because of coffee leaf rust and rising temperatures, the farm still has to apply some fungicide and pesticide. But they are able to limit application by widely planting the Chalún tree (Inga spp.). Not only does this tree provide shade and help fix nitrogen into the soil, it provides a feast for the “Chulunero” insect (as it is known locally), which would otherwise attack the coffee trees.

The farm also takes water – increasingly a scarce resource in previously water-plentiful Chiapas – seriously. Filtered water fountains run for the workers and aqueducts bring pure water from the springs above for use not just for processing but also for drinking and cooking. Water conservation is also taken very seriously on the farm. Previously, each of the smaller farms had their own mill. The farm has a water treatment plant for all water used during processing and has consolidated operations and process all coffee at a single mill, where water can be more adequately treated through the mill. The old mill at Chanjul has now been converted to a school.

All coffee on the farm is selectively hand harvested and sorted, again, when it is delivered to the farms mill. The coffee is pulped using a Pinhalense ecopulper, purchased in 2009, which separates ripe and underripe/underweight cherries again, along with removing any debris remaining with the cherries. This pulper uses one cubic meter of water to process up to 20 tonnes! This is a huge water savings and contributes greatly towards limiting the farm’s environmental footprint.

After pulping, coffee is sorted by density and delivered to separate tanks to ferment between 15 to 40 hours, depending on the weather at the time. The coffee’s ‘readiness’ to be washed is done using the traditional method of ‘prueba de palo’ (stick test), where the coffee is stirred with a long pole to see if it is the right consistency to be washed. The farm has experimented with temperature gauges, but the workers find that these traditional methods are equally as accurate in determining fermentation levels.

After fermentation, the coffee is delivered to a demucilager to remove any last traces of mucilage, again helping the farm save water and limit waste.

The region experiences insufficient sun to dry the entirety of the farm’s production on patios, so all of the export quality coffee is dried using the farm’s 10 guardiolas. Temperatures of these wood fired driers are carefully monitored, and coffee is dried at a slow and constant temperature of 40 degrees until they reach between 11-12% humidity.

The dried pergamino is then rested before being bagged and then delivered for dry milling to Tapachula or Veracruz, depending on the export market and availability.

All in all, the story of Guadalupe Zaju is the story of a coffee lover passionate about what he does. Passion has led him to forget budgets when trying to produce a great coffee, and Teddy will continue to take very step possible to ensure that coffee from his farm is the absolute best in the region.