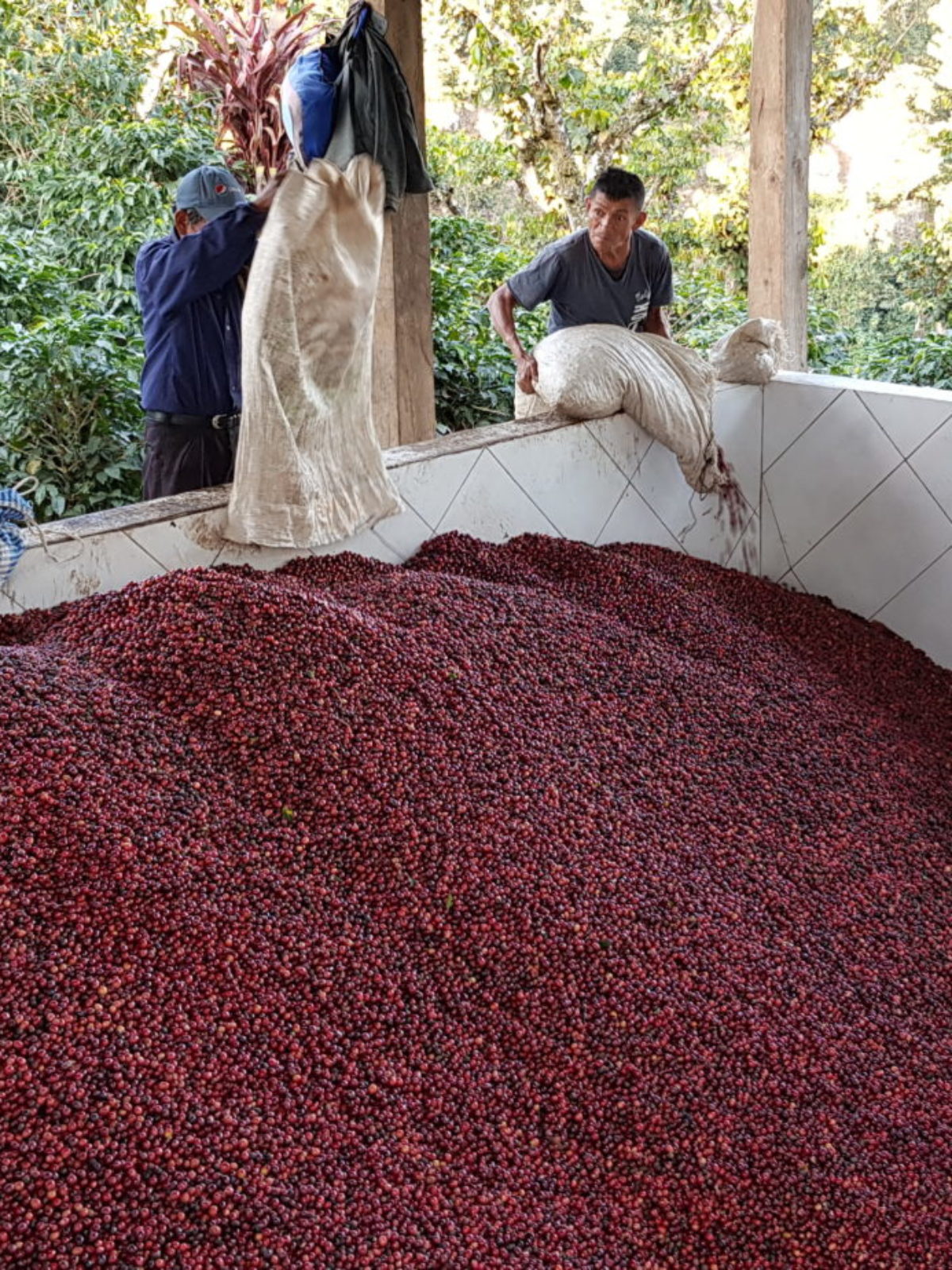 InstaLive with Wicho Valdés (one of the sons, and general & agricultural manager)

Apologies… this was our first InstaLive and we lost the first part of this great chat with Wicho from his other farm Santa Isabel. Here is the 2nd part. We will also be featuring another season from that farm again soon.

The Farm and the Family

Located near the town of San Cristóbal Verapaz, in the cool, rainy reaches of Cobán, Guatemala, Finca San Lorenzo nestles in the verdant hills at around 1,500 metres above sea level. San Lorenzo is the Valdés family’s second farm, purchased in 1987 as a sort of ‘little brother’ to their other farm, Santa Isabel. When Lorenzo was first bought, there was only one small plot of land under coffee. Today, the family have developed 20 different lots under coffee, covering 110 hectares of the farm. The remaining 35 hectares are under forest cover, which the family is managing in a very interesting way (see below).

The Valdés family have generations of coffee farming experience under their wings. Finca San Isabel was first acquired by Luis Valdes II’s great-grandfather in 1875, when the land was granted to the Valdés family by Guatemala’s President; however, the farm was passed out of the hands of the family when it was inherited by a nephew who sold it to a third party. It took time for the farm to return to the Valdés family, who took charge again in 1960 when Luis Valdes I purchased it, bringing it back into the family. He started the coffee plantation in 1965.

Don Luis and his son – also named Luis (nicknamed ‘Wicho’) – manage the farms as general and agricultural manager, respectively. Luis’s other son, Rodrigo, helps manage Agricola Valmar, the family export business. Now the brothers’ children (Luis’s grandchildren), spend their school holidays at the farm, much as their fathers did when they were young. It is a true family business, run with love and devotion….. and a lot of expertise!

When Don Luis first planted Santa Isabel, Cobán didn’t necessarily have a reputation for high-quality coffee, due in part to the fact that coffee from the region must often be mechanically dried because of the humid climate. Don Luis and Wicho, however, knew that the region had more to offer. By placing their attention on improved cultivation techniques and perfecting their drying practices, they succeeded transforming the quality of their coffee over the course of the last decade, even succeeding in placing Guatemala’s Cup of Excellence twice! San Lorenzo bears much in common with Santa Isabel – perhaps not surprising since it lies only 5 miles away! The farm’s Caturra and Catuaí production is indistinguishable in the cup from Santa Isabel’s. In addition, approximately 50% of San Lorenzo is planted under Sarchimor, a hybrid of the Costa Rican Villa Sarchi and Timor Hybrid. Thanks to its ascendant, Hibrido de Timor, the plant is resistant to coffee leaf rust and berry or stem borer. Grown at this higher altitude, the cup quality is also excellent.

Dealing with the Challenges of Coffee Leaf Rust

Wicho’s background in agronomy, combined with his passion for coffee farming, has led him to implement experimental practices that are paying off, as well, in the battle against coffee leaf rust. Both farms implement an innovative pruning schedule, which took some 15 years of experimentation to develop. The schedule has succeeded in greatly reducing the severity of rust’s impact on the farms. Plants are pruned according to a five row/five year cycle that is further fine-tuned according to each plant’s need for aeration and light. This helps to minimize applications of chemical fertilizers and pest control – in some cases, reduced by half of what their neighbours have to apply – by reducing excess humidity and fungal diseases. Furthermore, frequent application of lombricompost (mostly the by-products of wet-processing) has enabled them to reduce their applications of chemical fertilisers by more than 15%.

The annual precipitation at San Lorenzo is around 3,000mm, with regular rainfall between nine and ten months of the year. Constant rain (much of it gentle drizzle) means that flowering is very staggered, with 8-9 flowerings per year. Due to this prolonged flowering season, coffee ripens at different stages, which means that up to 10 passes (with breaks of up to 14 days between passes) are needed to ensure that only the very ripest cherries are selected.

After harvesting, the red cherries are taken to the wet mill at Santa Isabel, which lies very close by. They are then mechanically pulped. Coffee is fermented for up to 48 hours and is covered at night to maintain constant temperatures. After fermentation, the coffee is washed and then soaked in clean water for 24 hours to remove any traces of mucilage before being dried. It is important to note that Santa Isabel and San Lorenzo lots are processed completely separately and great care is taken to preserve the integrity of each lot of coffee from the two farms.

Most of the coffee is dried for at least one day on the patios. Usually, after spending one day on the patio, the coffee is stored overnight in wooden boxes before being moved to the greenhouses to dry between 15 and 30 days, or until a minimum of 30% humidity is reached. Much of San Lorenzo’s coffee is partially dried and/or finished in guardiolas according to a very strict and controlled drying schedule. Coffee is rotated in these mechanical driers at no more than 40°C and is rested between dryings to stabilise humidity. Once the parchment coffee reaches a constant 15% humidity, it is rested for at least 21 days in the warehouse before being delivered to the dry mill for milling.

The Rest of the Workers

Between the two farms, some 40 permanent workers are trained and employed year-around; up to 500 seasonal labourers are brought in for the coffee harvest. Wicho has commented that although many farms in the region find it increasingly difficult to secure labour for the entirety of the harvest, the Valdés family farms have a stable and reliable work force, despite their reputation for being very demanding with regards to selective picking. Many of the same workers come back year after year.

30 hectares of San Lorenzo remain under forest conservation. It is necessary to maintain this sort of forest cover, firstly, in order for the farm to be sustainable with regards to lumber. However, the family feel strongly that setting aside this large tract of land is the right amount of natural conservation to preserve wildlife in the area. In fact, throughout the farm, a very high priority is put on conservation. Although the farm isn’t organic, great care is taken with regarding to application of agrichemicals and organic composts are preferred. There is no hunting allowed anywhere on either San Lorenzo or Santa Isabel, and all forest land is managed so as to optimize native flora and fauna.

Despite these efforts, maintaining forest land in this part of Guatemala is increasingly challenging. Guatemala has lost vast swaths of native woodland because of disease and insect infestation – in many cases brought on by monocropping. In particular, the pine forests of Cobán are currently under threat due to a small fly that is killing pine plantations. The fly larva eats the pine needles of the trees and is voracious. As the needles grow back, the fly eats them again, and after a couple of cycles the tree will die. This pest has been moving towards Santa Isabel for the past three years, seemingly unstoppable.

In some areas of the farm, in addition to pine there used to be many Inga trees (nitrogen fixing trees traditionally used for coffee shade cover), but Wicho and his family are now looking for native, autochthonous (cedar, nogal and liquiambar among others) trees to replace these. By establishing more diversity, the family hopes to have a forest composition similar to what existed 50 years ago. This will foster a stronger, more resilient ecosystem in the long run.