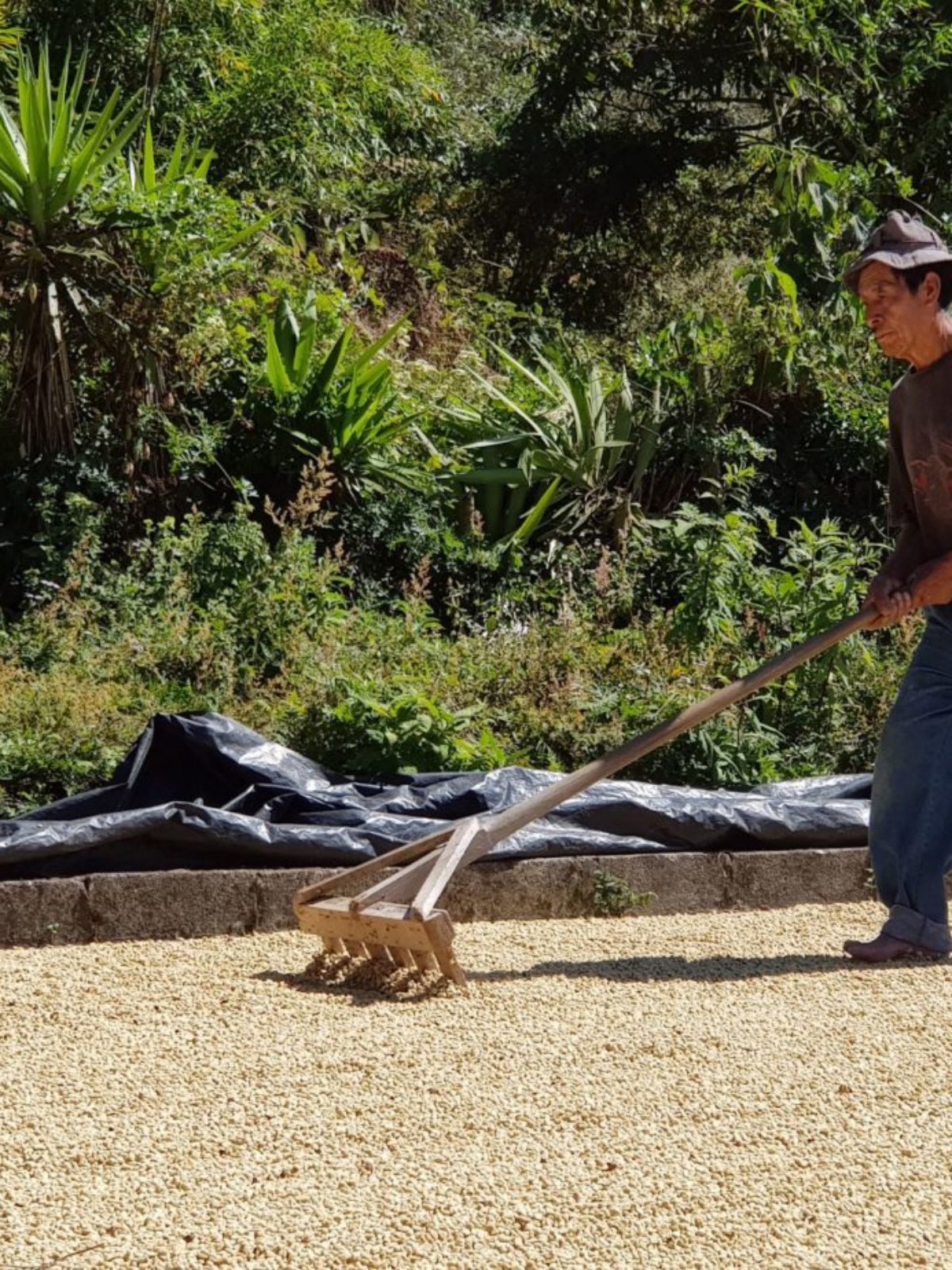 The History of the Farm and its Owner Victor Calderon

Victor Calderon represents the 5th generation of coffee farmers from a family that has been in coffee for more than 100 years; El Tambor, however, is a relatively new addition to the rich mosaic of farms dotting this region of Guatemala, just outside of Guatemala City.

Founded as a cattle farm in the 1930s, El Tambor’s previous owner had converted the farm’s steepest, highest slopes to coffee during the 1960s. However, as price volatility worsened during the late 1980s and early 1990s, he ceased to focus on coffee farming and instead granted mineral rights to a mining company, which began speculatively mining in various locations within the farm’s 700 hectares. Throughout the 1990s, the farm was slowly abandoned apart from these exploratory excavations – that is, until Victor took control of the land.

Victor bought the farm at the beginning of 2001 with the aim of moving out of Robusta cultivation (in which his family had previously specialised) and into Arabica. The bottom was falling out of the Robusta market at the time, and while Arabica wasn’t particularly stable either, he had a dream of finding a farm that lay at 1,500 metres or above so that he could specialise in high-quality, speciality Arabica production.

Victor was so committed to this vision that he sold his house and car in exchange for El Tambor, and upon signing the documents immediately set about renovating the coffee plots, expanding areas under coffee and improving the farm’s small wet mill. However, Victor is a true iconoclast when it comes to coffee farming and refuses to accept conventional wisdom or accepted practices in farming. Nowhere is this more apparent than his approach to controlling coffee leaf rust on his farm.

Coffee leaf rust is a devastating foliar disease of coffee trees which has a dramatic impact on the trees, on the harvest and on farmer’s livelihoods. “Coffee rust destroyed the once-flourishing coffee plantations of Sri Lanka and Java in the late 1800s, and an epidemic in Central America and the Caribbean has decimated numerous plantations in the region since 2012.” (https://www.britannica.com/science/coffee-rust).

When coffee leaf rust became truly apparent on El Tambor, Victor was concerned about using the chemically based fungicides widely recommended in Guatemala. Realising that fungi favour acidic environments, he had tried several alkaline solutions to apply the plants – everything from lemonade to orange juice – looking for one that worked. In his research, he read that clay – particularly from volcanic regions – is very alkaline, and his thoughts returned to El Tambor’s brief mining history.

Although very little was gained from the mines, they did leave a lot of clay – white clay with a high benzonite content. Victor suspected that this clay may provide just the solution that he was looking for. After much experimentation, Victor came to a unique recipe that has enabled him to fight off coffee leaf rust with minimal environmental impact. A solution of water and clay from the old mines is mixed together with a tiny bit of copper-based fungicide and then applied to the underside of leaves using a normal sprayer. Originally he had applied the solution on the tops of the leaves, but then realizing that the plants respire from under their leaves (and that is also where the fungus takes hold) he requested that workers apply the solution under the leaf. Suddenly, he observed that within 3 days the fungus had died on every plant to which the solution had been applied. He attributes this not just to the alkaline solution but also to the endothermic properties of the clay, which helps regulate temperatures and helps the plants fight off future infections. Even better, this method is ecologically friendly and poses no threat to workers’ health. It can even be applied without protective clothing.

Currently, the farm still has to apply the solution frequently – more or less once a month. However, although trees continue to lose some leaves, new growth comes through strong and cherry development is much improved. In conjunction with the treatment, Victor is still having to renovate Tambor’s Bourbon plantations (replacing up to a 6th of the farm annually), but he has been saving the seeds of the strongest trees, hoping to ‘teach the next generation of plants to resist rust’.

Victor manages the farm with 8 people who are in charge of their own specific areas and duties. All employees have permanent residence on the farm, and 10% of the farm is given over to the workers to produce their own vegetables. Nearly half the farm has been left under forest, which is set aside entirely as conservation area. In addition to the farm’s permanent workers, approximately 25 seasonal pickers are employed for the harvest.

As one might assume, given Victors unconventional means of managing rust, the farm is managed in an environmentally sustainable manner, using mostly traditional farming practices….combined with the odd experimental method, of course. Shade trees are regularly pruned as are the coffee trees after production, and weeds and grass are controlled manually. Chemical fertilizer is only used at early stages of growth in the nursery. Furthermore, an environmental project planting bamboo in local creeks has helped to capture water during the rainy season so that it can be slowly released during the summer dry months.

All coffee is picked and processed in microlots of around 22 bags of pergamino, selected according to location on the farm with attention to varietals making up the lots. Despite the farm’s size, Victor continues to process all of the farm’s coffee using a small pulper with a diesel motor. He points out that not only is this more energy efficient than larger pulpers, it is also more economical: $20 for diesel gets them through a full half of the harvest.

The Future of El Tambor and the Next Generation

In addition to El Tambor, Victor has also bought his two children farms on nearby plots of land – La Pia (named for his mother) and El Mezcal (named for a tree found nearby) are both gaining stellar reputations, as well. Like Tambor, La Pia has placed in the Guatemala Cup of Excellence and the goal is for all three farms to win in the same year.

El Tambor means ‘The Drum’ in Spanish: it is assumed that the name comes from the sounds of an underground river pounding under the ground, making a drum-like sound. Even though the sound can no longer be heard today, Victor carries on marching to the beat of his own drum, innovating and refusing to follow the well-trodden path simply because of accepted agricultural practices. In the future, Victor and his family want to continue planting single varietal areas, focusing on new and less planted varieties, such as Amarello, Pacamara, and Amarello geisha. They also plan to build new drying patios, a fruit garden and new tanks for the workers to farm fish