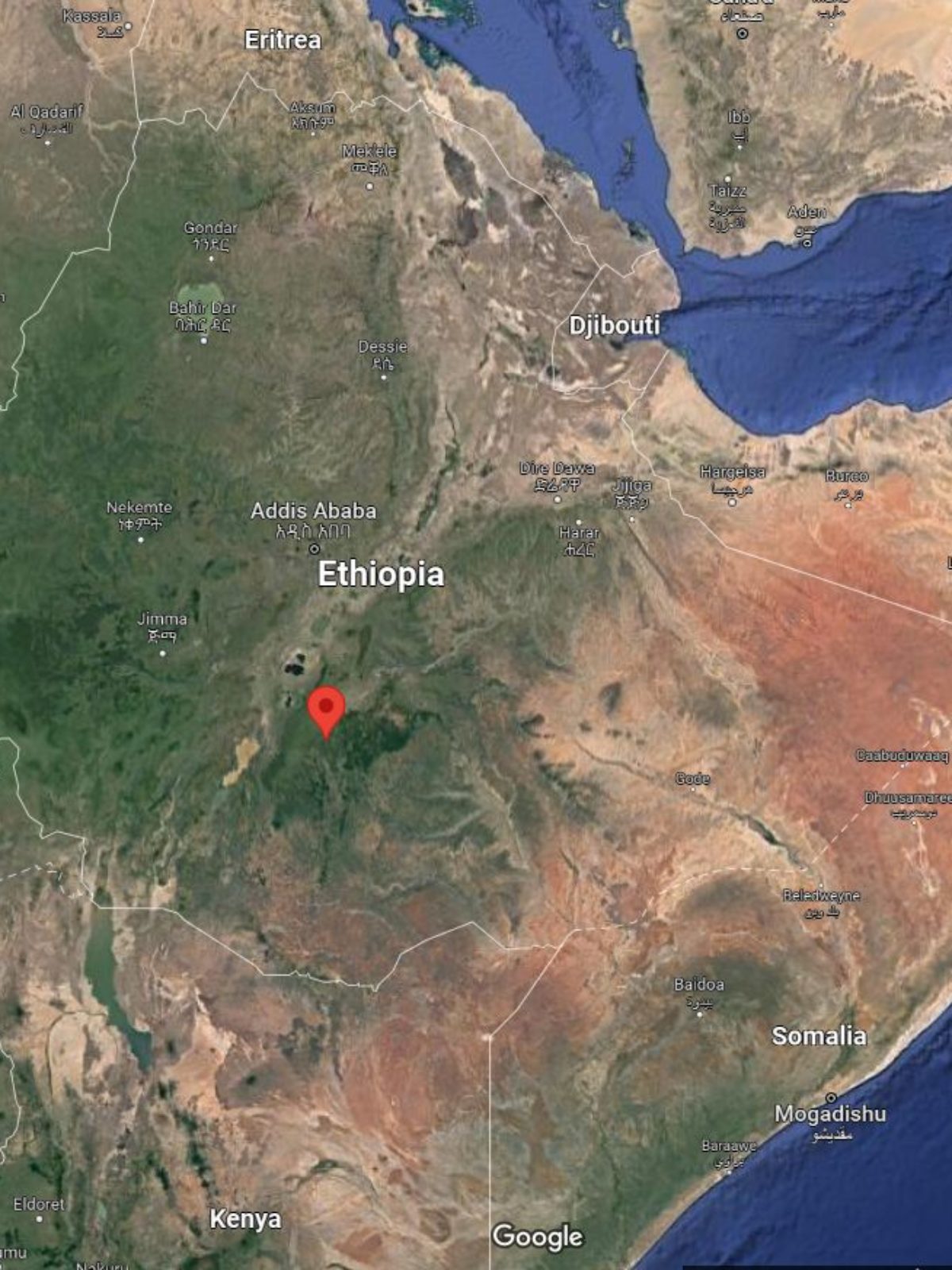 Located within the famous Sidama coffee-producing region of Ethiopia, the Keramo Station works directly with smallholder producers to mill coffee for export. Daye Bensa, the exporting organization in Ethiopia, provides assistance to producers to sell their coffee.

The owner of the mill, Asefa Dukamo, was introduced to coffee at a young age as his parents were cultivating coffee and other garden crops. In his teens, he began to supply neighboring coffee washing stations with cherries purchased from nearby relatives and villagers in addition to his own family’s farm. He realized that there were not many washing stations nearby, and he had to travel great distances to deliver his coffee. Thus began the idea to construct his own washing station to reduce the travel time for coffee
producers in his region.

In 1997, he constructed a washing station in the Girja village, less than one mile from his parents’ house. The following year, another washing station was constructed in Eltama, 30 kms from Girja. Dukamo then moved to the Daye town in the Bensa district, setting up the mother washing station called Qonqana. Eventually, a dry mill was added to provide facilities for naturally processed coffees. Asefa’s younger brother, Mulugeta Dukamo, is the co-founder of Daye Bensa Coffee Exporters, and played a key role in the expansion of the washing stations. Today, Daye Bensa operates in six woredas: Bensa, Bura, Chabe, Hoko (Girja), Aroressa and Chire with 20 washing stations, five mills and three coffee farms. An extremely impressive achievement.

As well as coffee, producers in the region will plant other crops such as sugarcane, a variety of fruits and “Inset”; a common indigenous plant that can be prepared as food in different forms. Income from coffee is important, but minimal for most farmers due to the small size of their farms. As such, inputs are minimal – most coffee grown in the region is 100% organic, though not certified due to high certification costs, as farmers simply do not have the money to apply chemical fertilizers, pesticides, or herbicides.

Producers working with the Keramo Station face a number of obstacles when growing coffee. This includes a lack of access to electricity, water, telecommunication, and road access. In addition, producers in the region suffer from reduced exposure to knowledge on the best coffee farming practices which can directly impact yield and quality. Fortunately, Daye Bensa has been working to combat these challenges, initiating their “Back to the Community” projects. So far, projects have included the building of roads to connect villages, installing electricity transformers and supplying producers with training in coffee plantation etiquette and better agricultural practices. Daye Bensa has numerous goals outlined for the coming years including an improvement on agricultural training and the construction of a Health Facility for producers and families. The impact the Dukamo family has on the region is significant due to the many farms they have been able to reach – educating youths about coffee production and connecting producers to global coffee markets.

For processing, the journey begins with only the ripest cherries being selectively handpicked. Once collected, the cherries are delivered to the mill to be sorted based on density and quality. This process is carried out by submerging the cherries in tanks and removing the floating cherries prior to drying. After sorting, the cherries are then de-pulped by machine and transferred into fermentation tanks for 24 hours. Once fermentation is complete, the coffee is rushed through tunnels and pushed with wooden tools to remove the mucilage. After the washing process is complete, the coffee is moved to traditional raised beds lined with mesh nets. The coffee rests here for roughly 12-15 days depending on temperature and humidity, rotation occurring every 30 minutes. Following this stage, the coffee is dried, and producers will generally travel via horseback or motorcycle 2-5kms to the dry mill. At the mill, the coffee is hulled via machine.

About the Sidama Coffee Producing Region

Located in the southern reaches of Ethiopia, Sidama is well-known for coffee. Yet, recently, it has been regularly contested about the correct spelling – Sidama versus Sidamo. After a referendum in June 2020, Sidama officially became a regional state in Ethiopia, thus the ‘Sidamo’ spelling was deemed incorrect. This region is home to nearly 3.2 million people speaking the Sidama language with their own culture and traditions.

Additionally, this region is prized with fertile soils, high altitudes, and an ideal climate for high quality coffee. The coffee industry, since the growth of popularity of coffee from Ethiopia, widely uses ‘Sidamo,’ but due to the aforementioned political changes, Sidama is the correct reference to the famed coffee-producing region.

About the Ethiopian Commodity Exchange and Traceability

Starting in 2008, Ethiopia began the centralization of all coffee exports through the Ethiopia Commodity Exchange (ECX), where the coffees were ‘anonymised’, stripped of any information other than region, in the interest of the farmers, who were meant to receive top dollar for quality regardless of the ‘name’ of the washing station or farm. Coffees moving through the ECX were (still are) delivered to certified coffee labs, where they were cupped according to profile then graded and marked generically for export. This ‘equalising’ measure certainly benefitted some producers, but it had the negative impact of eliminating most roasters’ and importers’ ability to provide accurate information of the precise traceability of coffees. Even after the opening of the ‘second window’ (devised for direct sales of cooperative and certified coffee), as of the end of 2017, some 90 percent of coffees still moved through the ECX.

For many years, Ethiopian coffee, some of the best in the world, was for the most part untraceable. This was the case back in 2015 when Origin’s owner Joel visited Ethiopia with Grant Rattray (of Mercanta Singapore) and Leah Warren (of Mercanta North America) and was still true at the time of Origin head roaster Jorge’s last visit.

While perhaps to a degree benefitting many farmers, the ECX system as originally conceived significantly damaged the exceptional work done by exporters, importers and roasters over many years to celebrate and recognize the extreme diversity of Ethiopian coffee and its unique qualities. The best Ethiopian coffees are without any doubt amongst the finest in the world. Imagine if the greatest wines or whiskeys in the world were sold with a region only and no producer traceability?

In a bit more detail, the new system allows any exporter with a valid license to sell directly to buyers without placing the coffee on the ECX first. There is a slight caveat – the parchment coffee will have to be sold within three days of arriving at the processing plant in Addis. If it is still unsold after three days (which is quite likely), it must be sold through the ECX: BUT with its traceability info intact rather than being deleted. Additionally, it is proposed that overseas companies will be able to plant and sell coffee, though this is still undetermined as of 2018/19’s harvest.

As of September 2019, The Ethiopian government and the European Union have officially announced the beginning of a €15 million five-year program, designed to boost the Ethiopian coffee sector. The program, named EU-Coffee Action for the Federal Democratic Republic of Ethiopia (EUCAFE), focuses on Ethiopia’s primary growing regions, namely, Oromia, Southern Nations Nationalities and Peoples (SSNPR) and Amhara. The project aims to tackle a number of objectives, including food security and health for vulnerable populations, improving farmer access to credit, technical assistance and inputs, marketing and strengthening premium market channels, climate change mitigation and involving more women and youth.