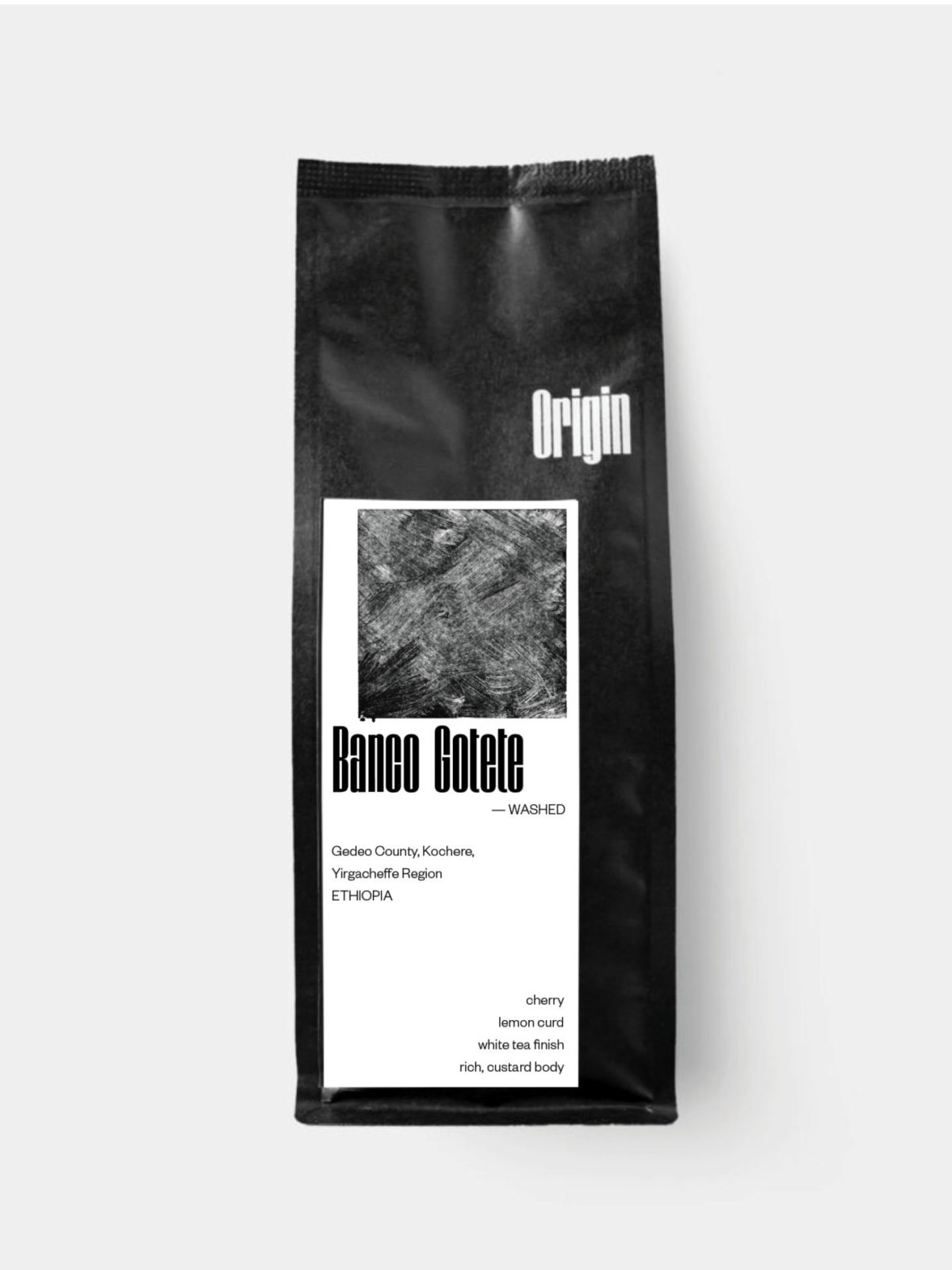 This exceptional lot was processed, dry milled and exported by Legu Trading. The coffee was grown by smallholder farmers living around the town of Banco Gotete in Gedeo County, in the Yirgacheffe region.

Most of these contributing farmers own less than a hectare of land, and they grow coffee simply as a backyard cash crop. Coffee will usually be interspersed with other subsistence crops, such as sweet potato, mangos and avocados.

Income from coffee is important but minimal for most farmers due to the small size of their farms. As such, inputs are minimal – most coffee grown in the region is 100% organic, though not certified, as farmers simply don’t have the money to apply chemical fertilisers, pesticides or herbicides, nor do they have the resources to get organic certification.

Legu trading tries to help with this situation by offering a premium price and by hiring as many individuals as possible in their mills and facilities. The company hires at least 300 people year-round and up to 600 in the high season. All workers are paid a fair wage and receive full, 8 hour work days.

Coffee is selectively hand-picked before being delivered to collection points, usually within 10 km of the producers’ homes. Great care is taken upon delivery to separate out any overripe, under ripe or damaged beans before consolidating with other lots for the road to the wet mill.

At least once a day, the collected coffee cherry is delivered to the mill, where it is pulped and then delivered to a fermentation tank, where it ferments for 12-18 hours depending on the climate at the time. After fermentation the coffee is fully washed through grading channels and is then delivered to dry on African beds. Once here, the parchment is turned regularly and protected from hot sun until it reaches the optimal humidity, at which point it is bagged and rested.

A bit about Ethiopian varietals

Varieties of coffee grown here are traditionally referred to as ‘heirloom’ by exporters – a catchall terminology which often masks the wide assortment of varieties that may be present within various regions or even within individual farms. Many of these varieties will have been developed by Ethiopia’s Jimma Agricultural Research Centre (JARC), which, since the late 1960s, has worked to develop resistant and tasty varieties for the Ethiopian coffee industry and also to provide the agricultural extension training needed to cultivate them. The dual factors of Ethiopian Commodity Exchange’s (ECX’s) forced anonymization of lots (see below), combined with the relatively low awareness of the various formal variety names outside Ethiopia has meant that the JARC’s work has historically been under-recognized by specialty importers and roasters. A new book issued by Counter Culture Coffee in the USA (2018/19) has drawn new attention to the topic, and rightly so.

It is important to note that varieties in Ethiopia fall within two main groups – regional or local landraces (of which there are at least 130, 33 of which would hail from the Southern growing regions) or JARC varieties. It is still very hard to tell but it is highly likely that this lot contains a great percentage of JARC 740110 and 74112 varieties, developed in 1974 by the JARC, which are directly descended from local landraces indigenous to the Gedeo Region. Most farmers have a mix of both the improved and the indigenous landrace varieties (inherited from parents and grandparents) on their farms, though research by Counter Culture’s Getu Bekele does show that there is a strong concentration of the JARC ’74 varieties.

The vast majority of the genetic diversity of Arabica coffee is in the wild in Ethiopia, and it is under severe threat due to global warming. Substantial efforts are being made to save it – given that coffee is a key crop that supports 100 million + people worldwide and the loss of this diversity could be catastrophic – from the perspectives of climate change, cup quality & diversity, yields and pest and disease resistance. Here are some excellent introductory articles to these issues:

Our recognition of these processes as an industry, admittedly, lags behind. Though the argument made by Getu Bekele are correct and salient, it remains difficult to get information from mills and exporters regarding the exact varieties that go into various lots. Mercanta continues to work with its partners in Ethiopia on this important issue, and they hope that in the coming years they will be able to provide more detailed information on the distinct varieties being grown by the farmers contributing to our Ethiopian lots.

At first glance Yirgacheffe’s hills look thickly forested – but in fact it is a heavily populated region and the hills are dotted with many dwellings and villages’ growing what is known as ‘garden coffee’. There are approximately 26 cooperatives in the region, representing some 43,794 farmers and around 62,004 hectares of garden coffee. The production is predominantly washed, although a smaller amount of sundried coffees also come out of Yirgacheffe (we will be releasing a washed coffee from the same mill in late December).

Around 85 percent of Ethiopians still live rurally and make a living from agriculture; each family usually lives in a modest home (often a single round mud hut) and farms their own plot of land, where they grow both cash crops and food for their own consumption. In Yirgacheffe, coffee is one of the main cash crops – covering from half a hectare to 1.5 hectares (the latter is considered big). This is usually planted alongside a second cash crop – often a large-leafed tree used in making roofs for (and also shade provider for the coffee) known as ‘false banana’. This looks like a banana tree but isn’t – instead its thick stem is used to produce both a nutritious flour and a fermented paste that are staple ingredients (particularly across southern Ethiopia). I did taste it in Ethiopia back when I visited in 2015, but I was not a huge fan!

There is only one main harvest a year in Ethiopia – this usually takes place in November and December across all of the country’s growing regions. There are, on average, 4 passes made during the harvest period, and, in regions that produce both washed and naturals, the last pass is used for the natural coffee. Washed coffees are then generally pulped on the same day that they are picked (usually in the evening/night), sorted into three grades by weight (heavy, medium and floaters), fermented (times vary – usually between 16 and 48 hours), washed and then usually graded again in the washing channels. The beans are then dried on African beds, where they are hand-sorted, usually by women.

About the Ethiopian Commodity Exchange (ECX) and traceability

For many years, Ethiopian coffee, some of the best in the world, was for the most part untraceable.

Starting in 2008, Ethiopia began the centralization of all coffee exports through the Ethiopia Commodity Exchange (ECX), where the coffees were ‘anonymised’, stripped of any information other than region, in the interest of the farmers, who were meant to receive top dollar for quality regardless of the ‘name’ of the washing station or farm. Coffees moving through the ECX were (still are) delivered to certified coffee labs, where they were cupped according to profile then graded and marked generically for export. This ‘equalising’ measure certainly benefitted some producers, but it had the negative impact of eliminating most roasters’ and importers’ ability to provide accurate information of the precise traceability of coffees. Even after the opening of the ‘second window’ (devised for direct sales of cooperative and certified coffee), as of the end of 2017 some 90 percent of coffees still moved through the ECX.

Back in 2015, Joel visited Ethiopia with our partners Mercanta (Addis to see exporters, Yirgacheffe, and Guji). We had the chance to speak to top exporters and to begin to understand the difficulty of traceability and getting the best prices to farmers under the ECX model. While it had been established with the best of intentions for producers, there were significant issues with the ECX system. It also seemed that the model did not necessarily best serve high end speciality roasters or the producers of those exceptional coffees, as the ability for roasters/importers/exporters to establish relationships with top producershad been lost, even as the worldwide speciality coffee market was evolving and growing.

In a bit more detail, the new system allows any exporter with a valid license to sell directly to buyers without placing the coffee on the ECX first. There is a slight caveat – the parchment coffee will have to be sold within three days of arriving at the processing plant in Addis. If it is still unsold after three days (which is quite likely), it must be sold through the ECX: BUT with its traceability info intact rather than being deleted.

As of September 2019, The Ethiopian government and the European Union have officially announced the beginning of a €15 million five-year program, designed to boost the Ethiopian coffee
sector. The program, named EU Coffee Action for the Federal Democratic Republic of Ethiopia (EUCAFE), focuses on Ethiopia’s primary growing regions, namely; Oromia, Southern Nations Nationalities and Peoples (SSNPR) and Amhara. The project aims to tackle a number of objectives, including food security and health for vulnerable populations, improving farmer access to credit, technical assistance and inputs, marketing and strengthening premium market channels, climate change mitigation and involving more women and youth.