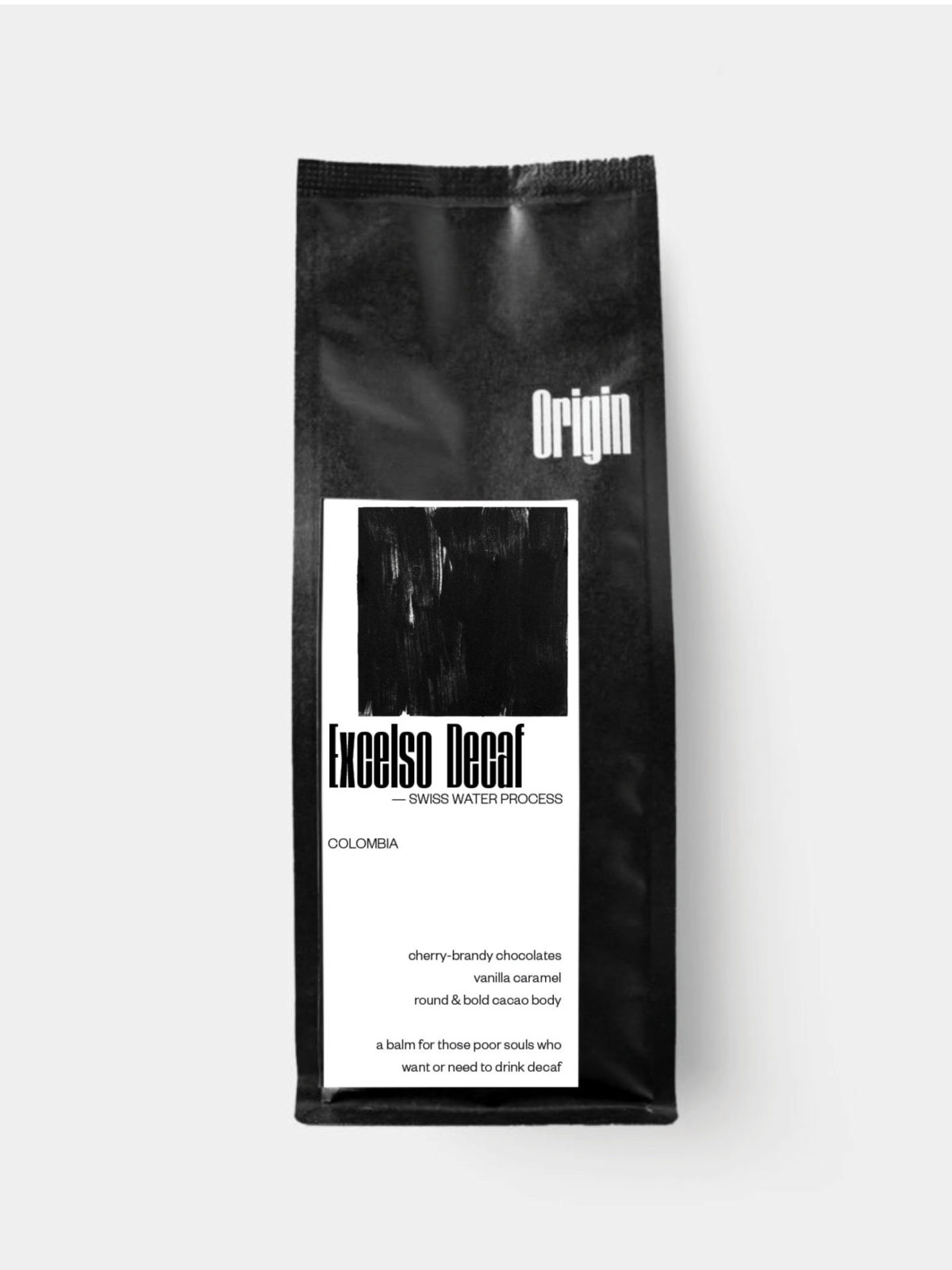 — Chemical-free, Swiss Water process. A balm for those poor souls who want or need to drink decaf.

Similarly, to the Mountain Water Process, a solution is created by soaking green coffee in water, allowing the soluble components in the coffee to leave the beans via the water. Using carbon filters, the caffeine is removed, the green beans are discarded, leaving a solution that is supersaturated with soluble coffee components, called a GCE (Green Coffee Extract).

Green coffee to be decaffeinated is then immersed in this solution. The GCE flows over the green coffee beans and to find equilibrium, the caffeine in those coffee beans begins to migrate into the GCE. No other solubles migrate from the coffee beans, as Caffeine is the only substance preventing equilibrium and missing from the GCE solution. The GCE now contains caffeine but not for long, it flows through carbon filters that trap the caffeine molecules and is removed. This happens continuously for 10 hours, under finely controlled and monitored conditions, resulting in green coffee beans that are 99.9% caffeine-free and ready for roasting – without the use of chemicals or solvents.

Firstly, all of Origin’s decaf are chemical free – typically processed via the CO2, Swiss Water or Mountain Water process.

Secondly, unlike many other decafs you might encounter, our decafs are made from the same grades of speciality coffee as our caffeinated coffees. In many other cases, decafs you might purchase start as lower grades of green whose flavour is then further degraded by the decaffeination process (the degree to which this happens is dependent on the specific process used).

This results in a significantly better cup than the vast majority other decafs out there.

Colombia is the third largest coffee-producing country in the world and, until the arrival of Vietnam on the coffee scene (whose outputs are mainly Robusta), Colombia was second only to Brazil. Coffee first began to be cultivated commercially in Colombia in the mid-1830s and throughout the twentieth century was the country’s main export crop. A mountainous topography and many tropical micro-climates contribute greatly to Colombia’s reputation for ideal growing conditions, which – in turn – have helped Colombia to establish itself as a recognisable ‘brand’ worldwide.

The diversity of coffee and profiles found across Colombia is enormous and coffee is harvested practically year-round depending on the region. The main harvest takes place from October to February with November and December being the peak months. There is also a second fly (or ‘mitaca’) crop several months later, again varying by region and micro climate.

The importance of coffee to the country’s economy can’t be overstated. Colombia has around 875,000 hectares planted with coffee across 590 municipalities and 14 coffee-growing regions. On average, 75 percent of the country’s production is exported worldwide, with the crop generating some 10-16 per cent of the agricultural GDP. The majority of this production surprisingly comes from small farms: 60 percent of Colombian coffee farmers cultivate less than one hectare of coffee while only .5 percent have more than 20 hectares.

Traditionally, the majority of coffees from Colombia have been processed using the fully washed method. After the red and ripe cherries are picked, they are often pulped by passing them through a hand pulper located on the family farm. The coffee is next fermented, helping remove the remaining mucilage, as well as helping to give the beans their signature profile which is substantially influenced by micro climate, fermentation times etc. Finally, once fermented, the coffee is removed and placed on raised parabolic beds to dry.

The drying process in much of Colombia is unique – small-holder farmers spread the parchment across the flat roofs (or ‘elvas’) of their houses to dry in the sun. Polytunnels and parabolic beds are also used in farms with high altitude and cold weather conditions. Parabolic beds – which are constructed a bit like ‘hoop house’ greenhouses, with airflow ensured through openings in both ends – both protect the parchment from rain and mist as it is dried and prevent condensation from dripping back on the drying beans.