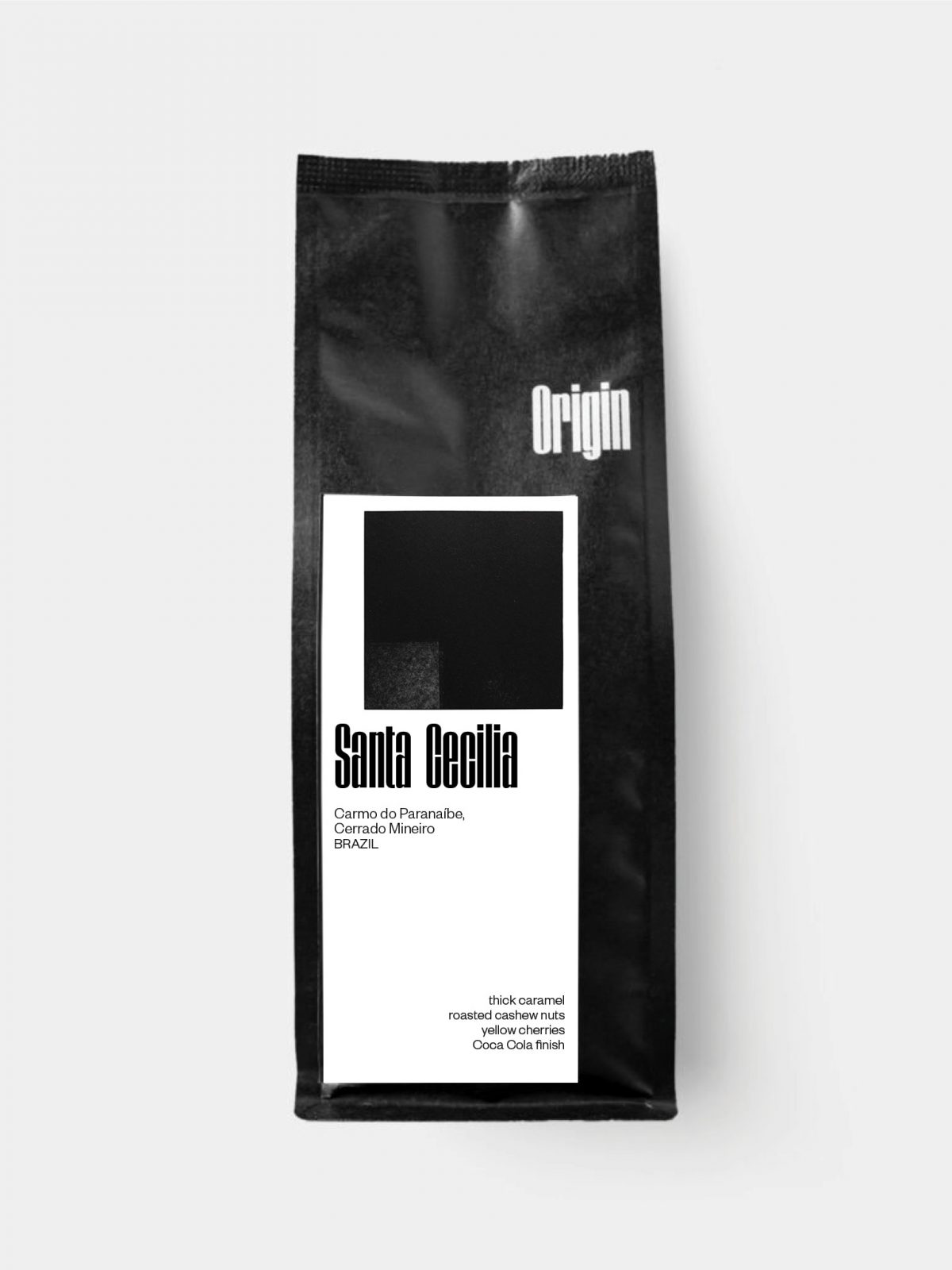 The farm, its history and the story of its owners the Veloso family

Located close to the heart of Minas Gerais, near to the city of Carmo do Paranaíba, lies the Veloso families crowning jewel; Fazenda Santa Cecilia. Covering over 1750 hectares, Santa Cecilia is home to many different lots which the Veloso family use for constant experimentation; searching for new varieties, as well as exciting fermentation and drying methods.

Made up of 55 separate counties, the region of Cerrado Mineiro can be found to the east of Minas Gerais; one of the primary coffee-growing regions of Brazil. Famed for its quality coffee production, the region ranges from 1,000 to 1,250 metres above sea level, providing ideal conditions for coffee production due to the perfect balance of wet and dry seasons. Cerrado alone is estimated to produce as much as 12.5% of Brazil’s total coffee output and has now received ‘Origin status’, meaning only coffee from ‘Cerrado’ can be called ‘Cerrado’; similar to Champagne in France.

Pedro Humberto Veloso, the owner of Fazenda Santa Cecilia, began his career in the 70s as a bean trader (not coffee beans, but pulses). Located in Sao Paulo, Pedro had a small warehouse where he could clean, pack and sell his beans. In 1975, the region of Parana was hit by such a bad frost, it was said to wipe out nearly 50% of the year’s total harvest. As the industry in the region was devastated, many Japanese families who had migrated to Brazil were forced to move to Cerrado, to plant new plantations. This is where Pedro first discovered his love for coffee farming.

Pedro began travelling and visiting the town of Santos to become involved in the industry and to try to gain interest in his samples. On his second trip and after a week of negotiating, Pedro was able to achieve a good price for his coffee. This enabled Pedro to purchase the land for his first farm and begin building his empire. For many years, Pedro stuck to what he was good at, negotiating good prices on the domestic market, as well as expanding his milling facilities and warehousing operation to surrounding farms. It wasn’t until the mid-80s that Pedro began to purchase new farms, followed by the purchase of Fazenda Santa Cecilia in 2004. Santa Cecilia takes its name from the saint, the patron of musicians. Named by the original owners who were devoted to the saint, today, Santa Cecilia is Pedro’s largest farm, as well as the site of his primary warehouse for all his operations.

The team and its approach

The team at Santa Cecilia are skilled producers, constantly looking for ways to improve their processes. Be it new technologies to improve irrigation, new machines, better warehouse service, or by maximising the use of ‘green’ products at the farms; there is always room for improvement. For the next few years, the team are focusing on improving their wet mill, switching to a new design to offer better results. In the future, Santa Cecilia plans to build reservoirs to fight climate change; allowing them to continue to produce coffee sustainably.

The team at Santa Cecilia have also implemented rigorous techniques to improve the cultivation of their coffee trees. One of the biggest challenges for Pedro when he first acquired Santa Cecilia was a disease found in the root of the plants called nematode. This disease meant that the tree suffers from a lack of root development, causing an inability to absorb all the necessary nutrients. To reduce the infestation, the team at Santa Cecilia started to plant varieties resistant to this disease but also instigated a new method of soil fertilisation called fertigation. For each plot, the soil is analysed to calculate the number of macro and micronutrients needed. With this recommendation, a method of fertigation by mechanised application is used, injecting the soil below the coffee trees skirt with the ideal balance of fertilisers. Fertigation is prioritised for new trees, offering the saplings small weak doses, forcing new trees to improve their absorption of nutrients in the future; hence fighting the nematode disease.

For pruning, the method found to produce the greatest economic return is noted as topping/cleavage. The pruning consists of removing a small piece from the plagiotropic branch and another part from the orthotropic branch (stem). This is normally conducted every 8th harvest for the best result. It is only after 4 more harvests that the trees are replaced to increase productivity. This 12-year cycle is being reduced every year. From 2023, Santa Cecilia hopes to change their trees every 9 years; further improving productivity.

Each lot at the farm is designated with a specific variety, area and age. When a new plot is planted, another area will be planted with a specific variety at the same time. This allows Santa Cecilia to plan their varieties crop cycles, offering homogeneous and high-quality harvests. For varieties, Santa Cecilia has a range of experimental fields. Here, they test new varieties such as IPR100, Catucaí and Ibc12, in the hope to improve resistance to pests and diseases. Each variety has an individual cultivation method, depending on; variety, age, expected output, vulnerability to certain diseases, as well as the microclimate and soil that said plot is planted on.

Every producer has different grades of coffee each season. High quality, speciality producers like Santa Cecilia also very carefully select their lots. Our partners Mercanta very carefully select specific lots within each season’s production.For the 2019 harvest, Mercanta has purchased the Red Catuai and Yellow Catuai varieties, chosen for their great cup score at the Mercanta lab.

As well as attention to detail regarding varieties and cultivation, processing is another key strength for Veloso. Constant testing is conducted, experimenting with different processing for each variety. Veloso’s main aim is to produce unique coffees, by applying unique fermentation and dry processes. Before harvesting, Veloso map out all of their plots and the output from of the harvest, directing their decision for which process to use for each plot.

For the Yellow Catuai lot – featured by us this season – the coffee was mechanically harvested and this time sent to the drying patio. Here, Veloso began by drying in layers of approximately 30 litres/m², folding layer every 4 days. In total, it took 22 days to reach the ideal moisture for this lot.

By contrast, for the Red Catuai lot, after harvesting, the coffee was sent straight to a drying greenhouse where it was spread out in layers of 20 litres per m². Here, it remained without movement with the drying progress tracked daily. After the initial rest, layers of coffee cherry are folded according to the drying evolution, creating an even level of moisture. This process lasted 21 days before the coffee had reached the optimum moisture.

Once the lots have dried, they are taken to the dry mill located inside Santa Cecilia. Here, lots are normally passed through two times to remove the remaining dried cherry husk before being prepared for export.

When Pedro purchased Santa Cecilia, the entirety of the land had already been deforested, making way for farming production. Because of this Pedro, purchased 15% more land in a separate location. This land is a preserved Cerrado forest that Pedro uses to encourage his Semear project.

The Semear (to seed) Project began in June 2012. Involving children from schools in Carmo do Paranaíba, the project aims to increase awareness regarding issues affecting the environment. The Semear Project emphasises the importance of protecting nature reserves against mass deforestation; regularly occurring today in modern Brazil. From 2018 to 2020, the project saw more than 124,000 seedlings planted to help encourage reforestation. This means that the relative proportion of the preserved areas covering Veloso Coffee farms is now 20% higher than required by Brazilian legislation. Pedro hopes that in the coming year the Semear project will continue to grow, adding valuable stability to their microclimates, as well as encouraging the growth of natural fauna and habitats for wildlife.

Even as the use of machinery increases in coffee farming in Brazil another primary challenge facing Veloso is the scarcity of qualified workers. To encourage employment on their coffee farms, Veloso has started several initiatives to encourage and increase the availability of labour. Although salaries are based on a local job standard, controlled by labour unions, Veloso offers education initiatives to long-term workers with high levels of performance. As well as education, Veloso aim to offer a good work environment, access to good nutrition and leisure space within their farms. This has been spearheaded by their new program, a vegetable garden located inside of Santa Cecilia Farm. Here, the team produce a wide array of fruits and vegetables to share between their employees.