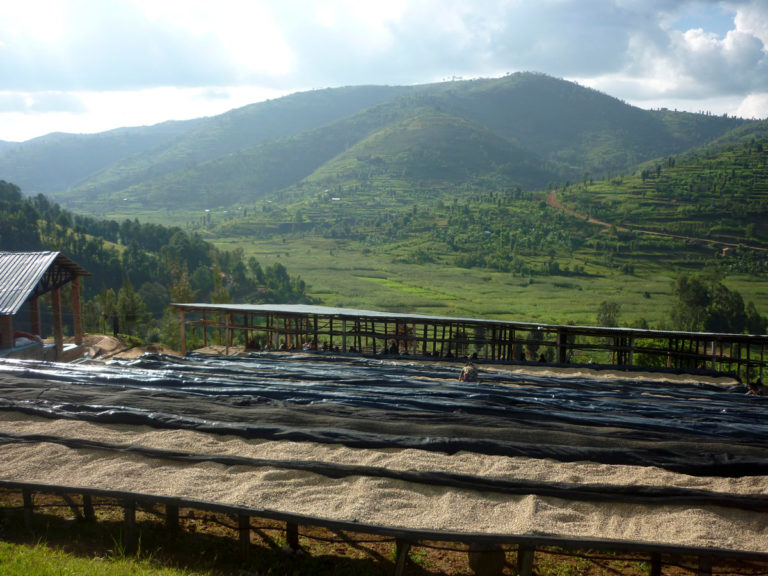 This coffee was actually released a little while ago but I thought I’d write a little post about it, especially considering that I recently tweaked the roast profile.

Let’s just take a quick peek at the specs:

This new profile tastes like caramel and golden delicious apple with a hint of lime. It also reminded me of honeysuckle nectar when brewed in a siphon with a cloth filter. It’s definitely at its best when brewed using a paper or cloth filter. Samuel and his Mother, Epiphanie (founder of Buf)

The title ‘Buf’ derives from ‘Bufundu’, the former name of the region in which its washing stations are located. A washing station, if you’re notaware, is a processing facility intended to optimize the removal of the fruit flesh from the cherry in order to get to the seed and get it ready for export. Coffee processing is incredibly important in modulating flavour and quality in coffee.

Buf is now managed by Epiphanie and her son, Samuel Muhirwa, who is taking an increasingly active role in running and expanding the business.

Epiphanie, who was born in 1959, was widowed during the 1994 genocide – which claimed over 800,000 lives in just 3 months – but chose not to leave her family’s small coffee farm. Instead she set about rebuilding and developing her business and with it the local community. It must be noted that Buf café have won 10 cup of excellence awards in the last 8 years. This is an incredible achievement. The cup of excellence award can be likened to the Veritas award for wine and brandy. I’ll speak more of the Cup Of Excellence another time.

On my trip to Rwanda a few years back, I visited Buf Café, it’s washing stations and all that it entails. Sam and his team were very hospitable during this period and took the time to take me through all their processing procedures. I was also fortunate enough to have a few drinks with Sam at a local night club that evening where his conversation tone changed from business and quality focused to aspirations and social commitment. It was an expected persona change from this unassuming and kindly man. There are certainly great things to come from Buf Café in the near future, and we will continue to work with them to see it all through.

As an aside-a noteworthy factor about this coffee would be that the Red Bourbon varietal grows prolific in Rwanda and is well suited to its climatic conditions and positioning in relation to the equator. In my opinion- Red Bourbon is one of the highest quality and most versatile varieties in the world. It’s well known for its clear and sweet finish and unbeatable balance. I would drink wet-processed( aka Fully Washed) Red Bourbon-especially from Rwanda- every morning if I could. I think subconsciously I tend to veer in that direction anyway.