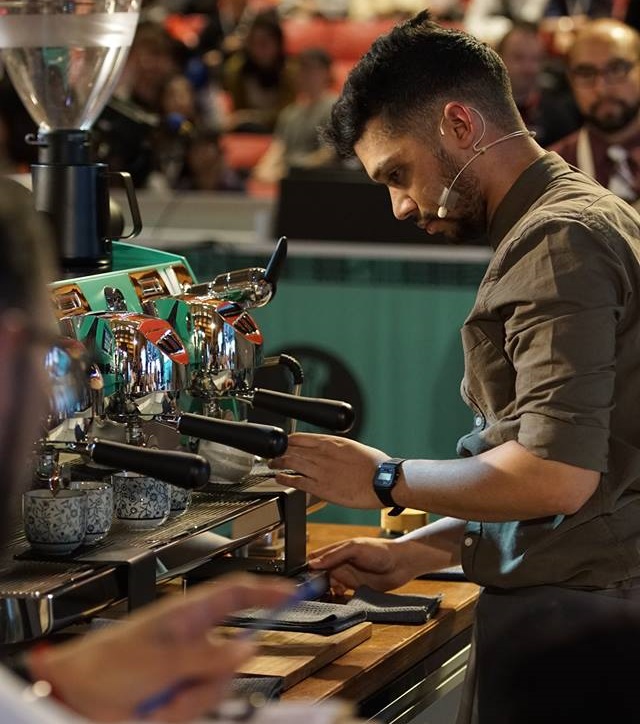 It’s been a week since my performance in Seoul. Recovering from the jet-lag, sipping on a coffee back home I already miss the rush of calling “time” and beginning another set. The feeling is bittersweet. My final ranking not going as well as planned, considering all the support and backing I have had by so many generous people but the overall experience was priceless.

Before my performance I had a few days to taste my coffee, fit in practice sessions, recover from jet-lag and taste some amazing food. This being my first WBC I wasn’t sure if there was a specific way of doing this. To sum it up, we got the opportunity to spend time with different teams (Germany, Turkey, El Salvador to name a few) talking competition, coffee and much more. It was very interesting to get the perspective from these professionals who are at the summit of coffee in their respective countries and relating to both the positives and negatives they experience in the industry. I only managed to secure one practice session at the basecamp training facility. This was invaluable. Tasting coffee at base-camp with my team in Seoul and running an impromptu set helped prepare me for what was to come on my performance day.

As for the food, I could not have asked for a better experience. One of the highlights was going on a food tour in a more traditional part of the city guided by a local student and provided by one of my sponsors Urnex. We got to taste a variety of Korean food such as Korean barbeque, kimchi, fried chicken, various seafood dishes, a fair amount of Soju and a very delicious plum based wine.

After all these experiences I still remained focused on my initial goal. WBC performance. This has been my second year of competing and I had just gotten used to performing at a National level. I had many discussions with experienced WBC competitors but I still had no idea what to expect on the WBC stage. Firstly the atmosphere backstage was electrifying. So many well-known coffee professionals, enthusiastic competitors and amazing coffees all together in one space. To say that this was overwhelming at first is an understatement. I was limited to two people assisting me backstage so I was not able to have my full team with me for my practice session. Still, the coffee was tasting amazing. We were able to run through all 3 of my beverages and finalize tasting notes in my allocated time. After all my equipment had been polished and packed on my trolley the time came for me to move onto stage.

The 10 minute wait before moving onto stage was the most nerve wrecking experience of all. The crowd, the cameras and presenters all waiting to see the next performance. Fast forward to the end of my performance. I had gone 39 seconds over time and had quite a few mistakes during the set. The culmination of so many months of preparation including the regional and national competition, never exceeding my time once and on the world stage I slipped up. Initially I was extremely disappointed in myself but after taking the time to process everything and looking back now I would not have changed a thing. The most important thing I wanted to say on stage was my conclusion, without it there would not have been as much meaning to my set. So a slow performance and including my conclusion cost me 18 places in the rankings but if anything this has molded me into a better and stronger coffee professional.

One of the highlights of the competition was seeing my brother Martin Shabaya from Kenya qualify for semifinals. The morning of his performance team South Africa, along with a few other wonderful people, all got behind Martin to help him prepare his set. I will always cherish the conversation we shared while polishing his equipment. This is what baristas competitions are about. Yes there are winners and losers, movies, big sponsorships and more. But what it really comes down to is the sense of community in the industry and this was so prevalent backstage. Having learnt many lessons from my experience at the WBC I am very excited to begin preparation for the next competition. In conclusion for those that might have missed it, I would like to finish off this post with my competition set conclusion:

“I would like to conclude with a quote from a famous chef Dan Barber. When speaking of the food he serves in his restaurant he says that you want the feeling and holistic idea of the meal to resonate with you long after you leave. Because at the end of the day it’s not just about the dish. It’s about what the dish represents that has to add up to something larger than just a plate of food. This is how I believe coffee should be and this is exactly what this coffee represents. The untapped potential of coffee in Africa. And as a proud African coffee professional there is no other coffee I would rather have served you today. So thank you so much for your time. It has been an absolute pleasure. Please enjoy your signature drinks. Time.”