We are proud to have this very special, naturally-processed, lot from the inaugural Ethiopia Cup of Excellence Competition. This is an exceptional, award-winning coffee from Ethiopia, the birthplace of coffee, Ethiopia, which can rightfully claim to be one of the premier coffee origins worldwide.

Gemeda Elias Dube, 32, has been working on his father’s coffee land since he was 15 years old when he first began helping tend the trees and learning the art of coffee production. When he reached 21, he started his coffee farm on 7 hectares of land gifted to him by his father. In just over a decade since, he has grown his producing area to 86 hectares. He produces and collects 1,340,000 kilograms of coffee annually from his land and 103 outgrower farmers on another 490 hectares. “I provide improved seedling and technical support to my farmers to ensure quality production,” said Gemeda.

For this particular lot, the local Variety Kurume is used. A commonly known variety among farmers in the Guji and Gedeo Zones, including Yirgacheffe, the Kurume name is often applied to other JARC-selected varieties due to the similarities in the tree’s appearance. It is important to note that varieties in Ethiopia fall within two main groups – (1) regional or local landraces (of which there are at least 130) or (2) JARC varieties. It is still very hard to tell but it is highly likely that this lot contains a great percentage of JARC 7410 and 74112 varieties, developed in 1974 by the JARC, which are directly descended from local landraces indigenous to the Gedeo Region. Most farmers have a mix of both the improved and the indigenous landrace varieties on their farms.

Gemeda processes both natural and washed coffee, which is auctioned through Ethiopian commodity exchange ECX. “I understand quality wins, but the market sometimes is not encouraging,” he said.

He submitted multiple coffees for the Cup of Excellence Competition, and his two coffees finished in 19th and 24th places with scores of 87.79 and 87.43. “This kind of competition is what quality producers like us can benefit from,” Gemeda said. “I look forward to the auction.”

About Cup of Excellence

Cup of Excellence is the most prestigious competition and auction for high quality coffees. The level of scrutiny that Cup of Excellence coffees undergo is unmatched anywhere in the specialty coffee industry. Each year, thousands of coffees are submitted for consideration, with winning coffees sold in global online auctions at premium prices, with the vast majority of auction proceeds going to the farmers.

The Cup of Excellence competition has pioneered integrity and transparency in the coffee industry, ensuring the value of winning coffees. Each sample entering the competition process is assigned a number known only to the auditor for each competition, and each jury member cups the coffee blind. In addition, each lot is documented through the entire process so that winning coffees are traceable to the farm and exact micro-lot.

Since 1999, the Cup of Excellence (COE) program has set the standard for the increased premiums that farmers have been able to receive for their exemplary coffees. It continues to build a much more transparent infrastructure and gives farmers the tools needed to improve the economic model of their farms. COE raises funds for coffees farmers in coffee growing countries incentivizing and motivating farmers who know there can be a recognition and financial reward for their hard work and effort.

The competition is rigorous, with cupping evaluations conducted over a three-stage process by industry experts: first by a National Jury of about a dozen qualified jurors from the origin country, and then by an International Jury, comprised of approximately 20-25 experienced jurors from around the world. A competition with 300 entries yields an average of 9,000 analyzed cups, with each “Top 10” coffee being cupped at least 120 times. This process ensures elite top-quality consistent coffees enter the COE auction.

We have personally participated as judges in three CoE competititons – owner Joel Singer, in Rwanda & Bolivia, and our ex-head-roaster Mike MacDonald, also in Rwanda. I can attest to the extraordinarily rigorous competition process and protocols, and the extraordinary quality, skills & experience of the international (and local) jury members.

We have imported many lots over the years so that South Africans can taste some of the rarest and highest quality coffees on earth.

We are proud to have secured some 60kg of Lot No 19 from the inaugural Ethiopia Cup of Excellence competition. 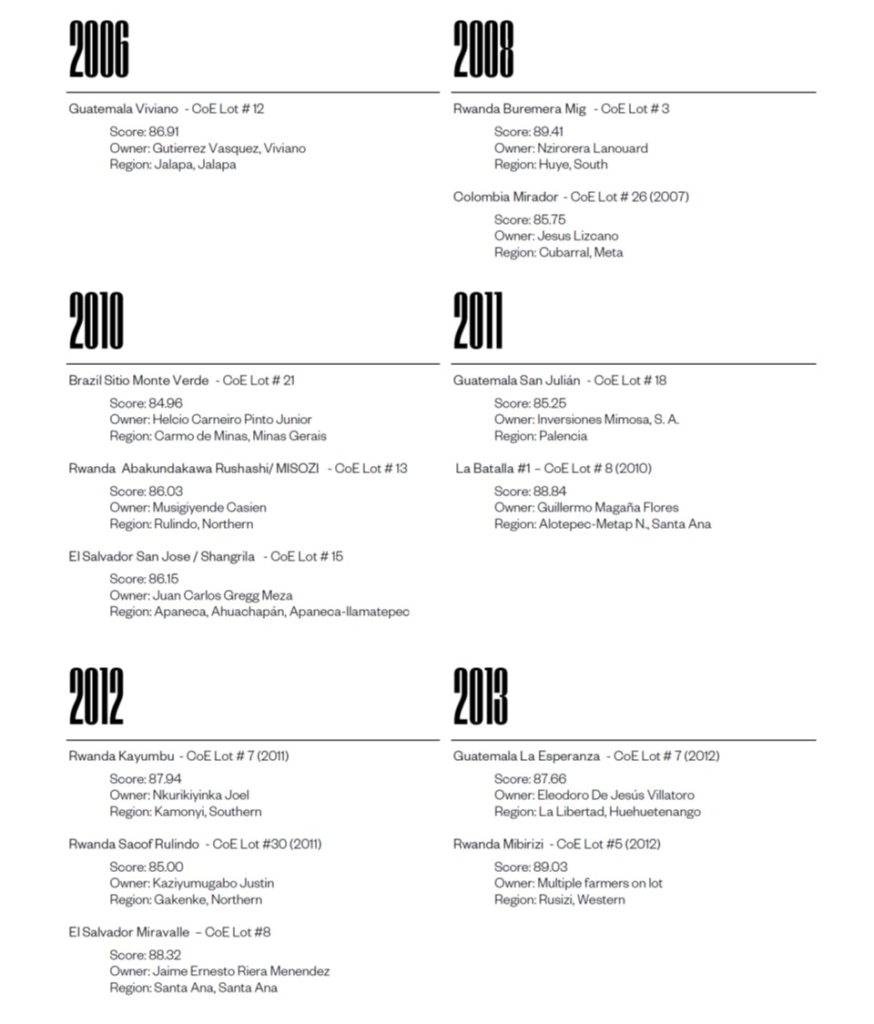 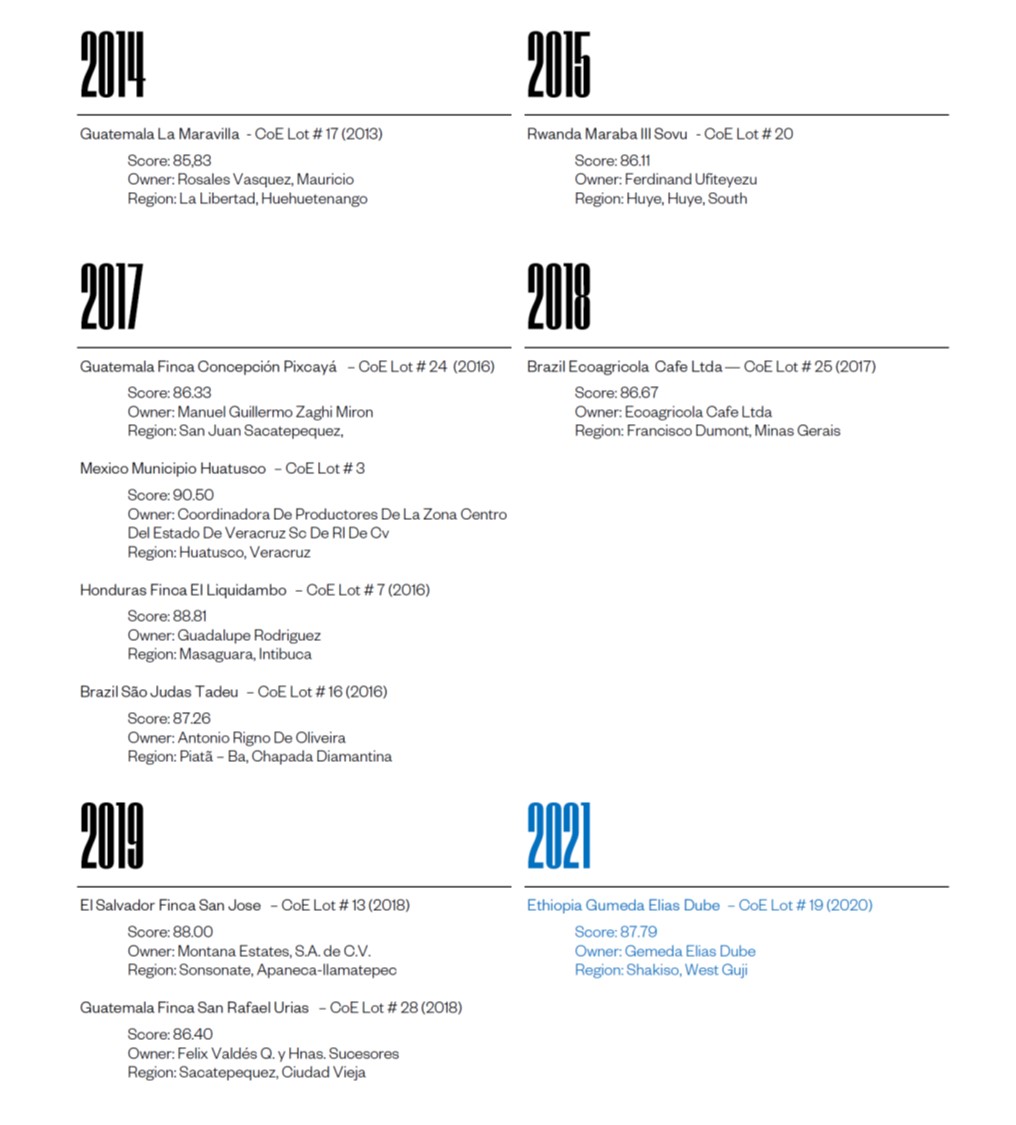