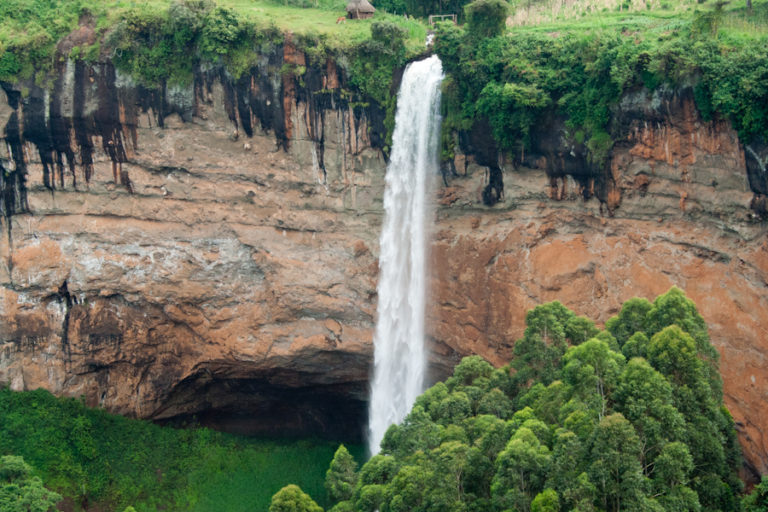 Uganda has traditionally been known as a producer of Robusta- an inferior quality species under the Coffea genus. The major reason Arabica was not being produced in many areas in Uganda in the first place was more a matter of infrastructure, history and knowledge than environment.

Some premium growing areas for delicious Arabica would be the slopes of Mt. Elgon in Uganda’s East (bordering Kenya) and on the slopes of Mount Rwenzori, known locally as the ‘mountains of the moon’, in the Northwest bordering the Democratic Republic of Congo.

The name, Kawacom Sipi Falls Sustainable Project, hails from the local scenic landmark of Sipi Falls. This 3 phase waterfall plunges down the slopes of Mt Elgon. It was thought to be the highest mountain at one stage because of its gigantic base, which covers 3,500 square kilometers across Uganda and Kenya.

SL14 and SL28 was actually developed between 1934 and 1963 by Scott Labs, a research organization that was based in Kenya. These varieties are not hybrids, but rather, selections chosen over time. SL28 in particular is the most well known variety of the two, and is of excellent quality, showing a great deal of clarity in the cup substantial sweetness level. Both of these varieties work wonderfully with the terroir.

All coffee is selectively hand-picked and is delivered by individual farmers to one of Kawacom’s 9 collection points and then taken to their new state-of-the-art wet mill, and after sorting, the ripe coffee cherries get run through the pulpers. After pulping, mucilage is mechanically removed( this actually saves water), the parchment is soaked in tanks for 12 hours and is then either delivered to dry in beds in the sun (very low quantities due to seasonal rains) or dried at low, constant temperatures in mechanical driers that are fueled by dried coffee husks. So, this is not your typical fermented, wet-processed coffee. Processing like this seems to produce a cup with an acidity profile that’s less pronounced. Since 2015, the mill has also been able to produce very limited quantities of Natural processed coffee, a method which won the group a Taste of Harvest award in 2016. We’ll definitely try to get our hands on this sometime in the future.

Superb genetics, flawless processing procedure and of course, arguably-almost-perfect terroir make this coffee a must-try for anybody.

In the cup:– expect crème caramel, pineapple and oolong tea, with a light body and juicy mouth-feel.