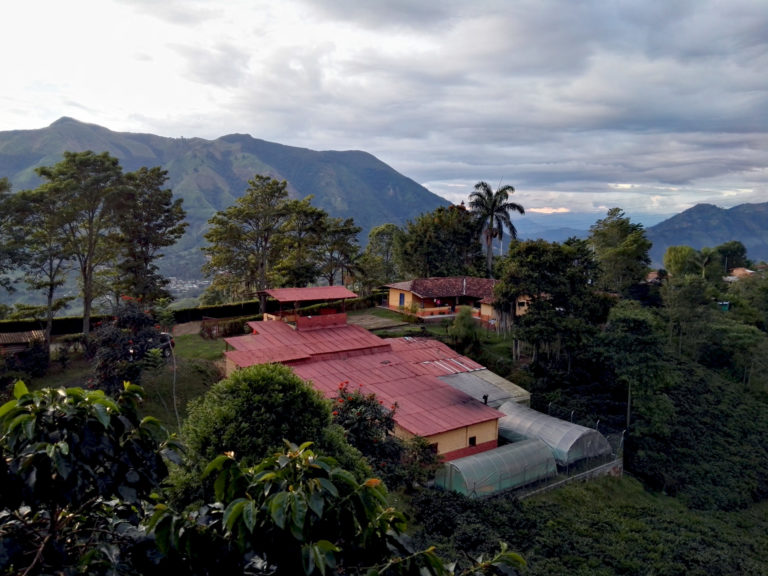 Santa Barbara Estate is composed of 5 sister farms that lie across three neighbouring regions – Santa Barbara, Fredonia and Amagá. Finca Veracruz is a small farm that was established in the high Andes of a region called Antioquia (Pronounced: Un-Tee-Oh-Kee-Ah)as part of Santa Barbara Estate. Diverse microclimates, volcanic soils and a perfect altitude spectrum characterize this region. Veracruz has become an experimental farm in many ways.

Juicy and slightly winey with notes of berry jam, black grape and passion fruit. This coffee is very versatile.

A quick look at the specs: What’s unique about this coffee?

Veracruz lots consist of  between 3 to 5 days pickings. Every day, a freshly picked batch is pulped and added to the previous pulped batch in the fermentation tank. Each consecutive addition raises the ph level  of the fermentation tank, allowing longer fermentation times. This slows down the possible excess production of acetic acid (Vinegar) in the batch due to various bacteria and yeast-strain activity.

Longer and slower fermentation times also means longer contact time with the fruit flesh(Mesocarp/Mucilage). But at the end of the process, the sticky mucilage is still broken down in the fermentation tank by these bacteria and yeast strains.

The result is a coffee that has the characteristics of a Natural processed coffee as well as a wet-processed coffee. You can expect the fruity/winey/juicy character of a ‘Natural’ with the clarity, complexity and versatility of a ‘Washed’ coffee

The inspiration for the process was taken from small farmers throughout Antioquia and Huila, who often have two or three day fermentation periods as their farms are so small that one day’s picking is often not sufficient to make up an entire lot. The team at Veracruz have perfected the process and adapted it for larger-scale production.

Colombian coffees have carved a secret space in my heart, especially of late. I think it’s because I’m aware that Colombia has become one of the most progressive Coffee farming countries globally, particularly with regards to innovation in processing, as well as varietal development and selection in the face of the multitude of ecological effects created from the ongoing climate change issue we’re facing.

Definitely one of the most interesting coffees this year.

Kudos to the Echavarria Family for this magnificent gem.