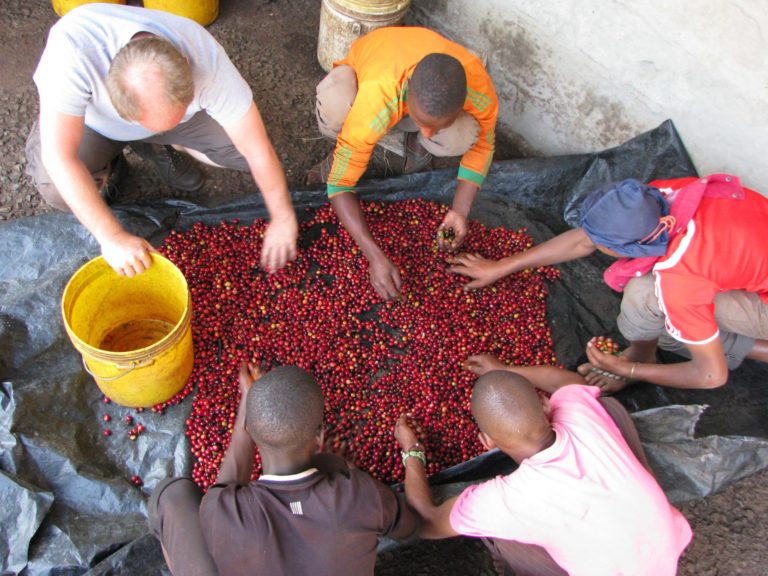 Michael Gehrken – the owner of the farm –  was born in Germany, and along with his wife Tina, have farmed Blackburn estate for over 20 years now. When they took over the farm, Blackburn’s coffee trees were entirely overgrown with vegetation indigenous to this beautiful area on the southern border of the Ngorongoro Crater.  A troop of baboons decided to set up camp in the main house too. They also occasionally roost overnight in the large mature trees at the north-west boundary of the farm and munch on coffee cherries to their delight. Of course, this is not good for business, and Michael frequently attempts to deter the troop – numbering more than a hundred individuals – as best he can.

Sounds like a scene out of ‘Planet of the Apes’, doesn’t it?

He cautioned us to not walk around on the farm in the evening as lions would sometimes roam close by. Considering that we were basically on the outskirts of the Ngorongoro Crater, that was definitely possible. And indeed, we could see the multitude of wild beasts roaming the Crater from his front porch during the day.

The Ngorongoro Crater is a UNESCO World Heritage site and the Gehrken’s have set aside 80% of the estate’s land as wildlife preserve . Animals are entirely free to roam beyond the unfenced park boundaries, and lion, buffalo, elephant, leopard and many other species roam through the coffee and forest areas of the farm at night.

They also regularly build coffee parchment and chili pyres around certain sections of the farm to deter elephants from damaging the coffee plants. Special bio-corridors have also been made to funnel animals away from the growing area.