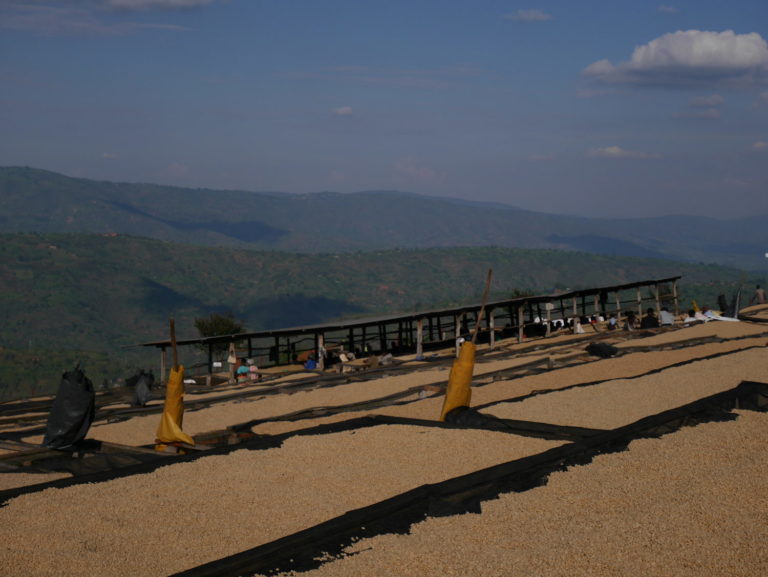 ‘Musasa’ means ‘a place to make a bed’ and ‘Dukunde Kawa’ means ‘let’s love coffee’ in Kinyarwanda. This is a reference to the power of coffee to improve the lives of those in rural communities. The Musasa Dukunde Kawa cooperative has three washing stations lying high in Rwanda’s northwest region. Just a reminder for those who have forgotten. A washing station is a coffee processing area focused on removing all the layers of the coffee cherry to get to the seed and prepare it in such a way that is ready for storage and export.

Ruli – the cooperative’s first washing station – was built by the co-op in 2003. Constructed at 1,999 meters above sea level, it is one of Rwanda’s highest washing stations. One can argue that having a washing station positioned at a higher altitude would slow down fermentation in processing and in that way can affect the overall cup profile of a coffee through the activity of various bacteria and yeast strains. However, there are currently too many variables, some of which are not even quantified, to be able to make a solid conclusion on how this might affect the cup profile. I suspect that will change globally, in the years to come.

In addition to the great work that the cooperative does with quality improvement and assurance at all parts of cultivation, harvesting and processing, they also have various social programs that greatly contribute to the livelihoods of their members. School fees and medical insurance are provided along with training in quality and productivity in the cultivation of coffee. The cooperative also gives cows as bonus payment for Coffee cherries of high quality. These cows not only produce milk for cheese, which helps improve diets and provides supplementary income for farmers, they also provide some stellar fertiliser for their coffee trees.

The cooperative has also invested in a great deal of custom built bikes that help smallholders deliver their harvested cherries to the cooperative’s three washing stations. This not only reduces the labour required for farmers but also means that it is now much easier to deliver cherries on the same day as picking, which ensures greater quality. Farmers who work with Musasa Dukunde Kawa have seen their income at least double, and the co-op produces some outstanding lots for the specialty market year after year. As can be seen above by the specs- they have won many Cup of Excellence awards over the last 10 years.

In the cup, expect crème caramel, citrus fruit and cardamom. Juicy mouthfeel with a citrus acidity.

This has been one of Origin’s best-selling and cherished coffees for many years, and will likely be so going forward. Neil Gouws, Origin’s resident Barista extraordinaire used this coffee for the recent South African National Barista competition. He came second overall and tied with Winston Thomas (current SA Barista Champion) for best espresso.