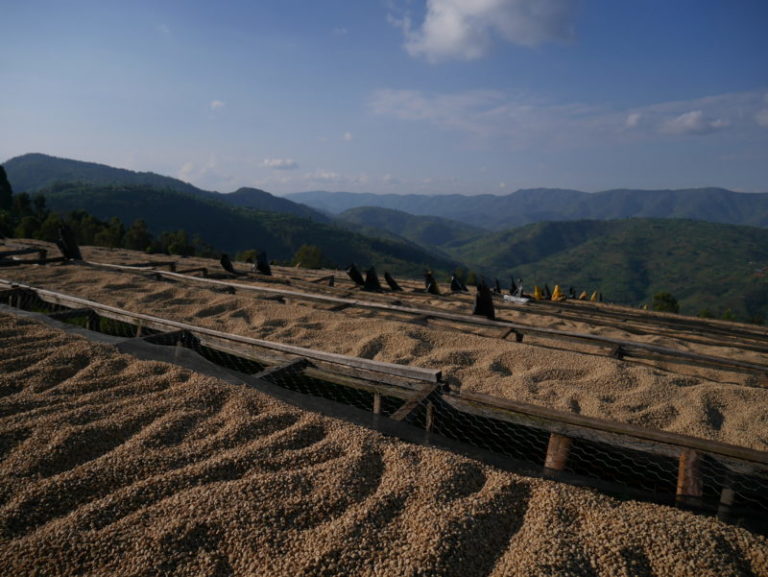 Most of the small scale producers with whom Musasa Dukunde Kawa works own less than a quarter of a hectare of land, where they cultivate an average of only 250 – 300 coffee trees each as well as other subsistence food crops such as maize and beans. The cooperative gives these small farmers the chance to combine their harvests and process cherries centrally. Before the proliferation of washing stations such as Ruli, the norm in Rwanda was for small farmers to sell semi-processed cherries on to a middleman, and the market was dominated by a single exporter. This commodity-focused system – coupled with declining world prices in the 1990s – brought severe hardship to farmers, some of whom abandoned coffee entirely.

Today, it’s a different picture. Farmers who work with Musasa Dukunde Kawa have seen their income at least double, and the co-op produces some outstanding lots for the speciality market year after year. ‘Musasa’ means ‘a place to make a bed’ and ‘Dukunde Kawa’ means ‘let’s love coffee’ in Kinyarwanda – a reference to the power of coffee to improve the lives of those in rural communities.

Musasa Dukunde Kawa now owns three washing stations and is one of Rwanda’s larger cooperatives, with 2,148 members as of the 2014/15 crop year. Ruli washing station began serving local farmers in 2004 and today buys and processes cherries from 1,438 farmers in the area. All of this is overseen by Wet Mill Manager Valens Ntezimana, who has held the post since 2012. Under his direction and with the help of 28 permanent employees and 287 seasonal workers, Ruli has grown to process 9 containers of exportable coffee.

The level of care that Musasa Dukunde Kawa Ruli takes over the processing is impressive. Cherries are hand-picked only when fully ripe and then pulped that same evening using a mechanical pulper that divides the beans into three grades by weight. 2015 saw the installation of a brand new pulper that should increase the washing station’s capacity and give even more control over processing and quality. As at most washing stations in Rwanda, women do the majority of the hand sorting.

After pulping, the coffee is fermented overnight (for around 12 hours) and then graded again using flotation channels that sort the coffee by weight (the heaviest – or A1 – usually being the best). The wet parchment is then soaked in water for between 18 and 24 hours to stabilise moisture content.

In the cup expect apricot, almond, cocoa and nutmeg flavours with a round body. This coffee is best suited to espresso, siphon and pourover. Enjoy a cup at Origin in De Waterkant and Bree or grab a bag of beans for your home or office. View our full coffee offering here.