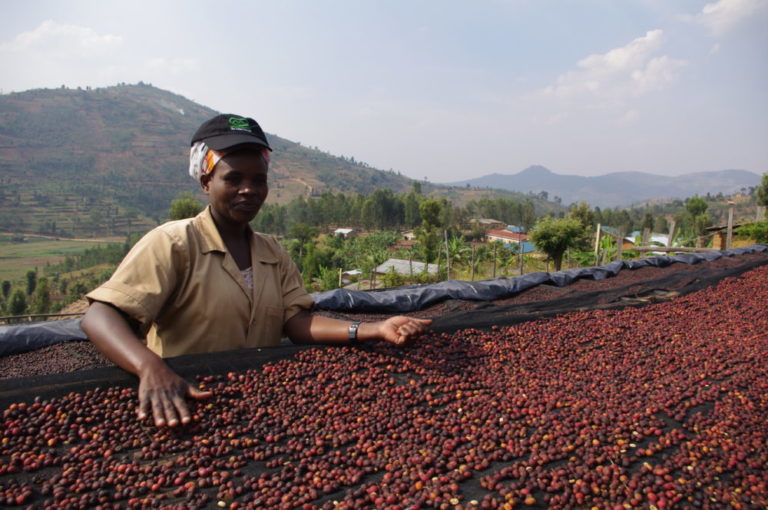 A look at the Specs

Buf Café was founded in 2003 by Epiphanie Mukashyaka, a dynamic businesswoman and a source of inspiration to countless other female entrepreneurs in Rwanda’s coffee sector and beyond. Buf is now managed by Epiphanie and her son, Samuel Muhirwa, who is taking an increasingly active role in running and expanding the business. The title ‘Buf’ derives from ‘Bufundu’, the former name of the region in which its washing stations are located.

Epiphanie, who was born in 1959, was widowed during the 1994 genocide – which claimed over 800,000 lives in just 3 months – but chose not to leave her family’s small coffee farm. Instead, she set about rebuilding and developing her business and with it the local community. She started Buf Café in 2003 when she established Remera washing station with a loan from the Rwandan Development Bank and the assistance of the USAID-financed PEARL project.

Buf Café now owns two coffee washing stations – Remera and Nyarusiza – as well as its own coffee trees and buys coffee cherries from as many as 264 surrounding smallholder farmers, as well as three different local cooperatives! At Buf’s Nyarusiza washing station in 2014, there was a total of 798,685kg of cherry delivered throughout the season, approximately 5% of which was delivered by trees owned by Epiphane and her family. The remaining quantity of delivered cherry comes from farmers within the community surrounding the washing station.

This 100% red bourbon coffee was processed at Buf Café’s Nyarusiza washing station, at 1,743 metres above sea level in the south of Rwanda. Buf has very strong links with the local communities that supply it, providing jobs for 116 at Nyarusiza during peak harvest (May – June/July) and 9 permanent positions. A further 127 people are employed at Remera during harvest, with 10 permanent positions. (2014 figures) At the end of each season, Buf will share any surplus profits with both the cooperatives that it works with and its washing station managers.

The majority of the small farmers in the area have an average of only 300 coffee trees (less than a quarter of a hectare) and use some of their lands to cultivate other crops such as maize and beans to feed themselves and their families. Most of their income from the sale of coffee is used to take their children to school, pay for medical care and for investment in livestock such as a cow for milk, both for use in the home and for sale locally.

After pulping, the coffee is fermented overnight and then graded again using flotation channels that sort the coffee by weight (the heaviest – or A1 – usually being the best). As at most washing stations in Rwanda, women do the majority of the hand sorting.

In the cup expect spicy flavours with hibiscus and plums with a medium, juicy body. The versatile coffee is suitable for any brewing method.

Enjoy a cup at Origin in De Waterkant and Bree or grab a bag of beans for your home or office. View our full coffee offering here.