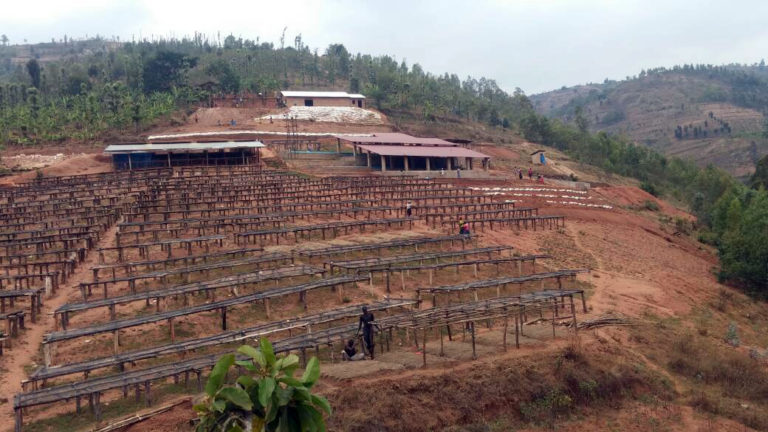 The Umurage washing station was constructed with the intention of reducing the burden of farmers travelling large distances with their coffee.

Almost all these small producers have inherited their very tiny coffee farms from their parents and have been farming coffee for decades, but for little money. This was an infrastructure issue and most coffees were home processed at that time. After 2000, with the introduction of wet mills in Rwanda, home processing began to take a back seat, as farmers saw higher returns from supplying cherries to washing stations where quality could be more tightly controlled and enhanced. When Buf came on the scene, the bond was sealed, and the relationships between Buf and the local farmers that supply the washing stations keep getting stronger.

Buf café recently created a system with farmers that they work in different groups each composed of 30 to 60 farmers. Through these groups, farmers are trained in good agricultural practices to improve their coffee quality and quantity while conserving the environment. The majority of the small farmers in the area have an average of only 300 coffee trees (less than a quarter of a hectare) and use some of their land to cultivate other crops such as maize and beans to feed themselves and their families. Most of their income from coffee is used to take their children’s school fees, medical care and for investment in livestock such as a cow for milk, both for use in the home and for sale locally. Access to training and information that can help to increased yields through the new program has the potential to be transformational.

In the cup, expect sugar cane, cranberry and pear with a tart acidity. An exotic character is certainly emerging from this lot of Buf Café. It just gets better and better.