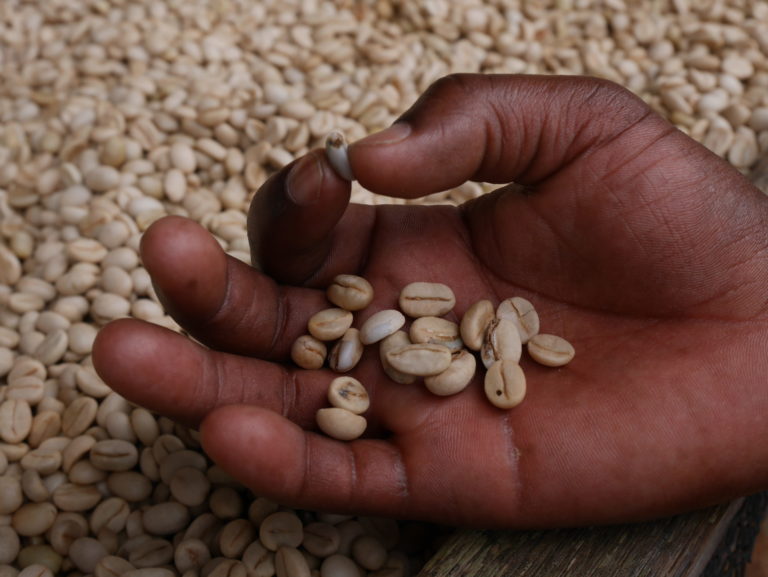 The title ‘Buf’ derives from ‘Bufundu’, the former name of the region in which its washing stations are located. We have been been buying from Buf café for many years now and we continue to taste improvements in their coffee. For a detailed write up – click here.

A quick look at the specs-

Peaberry? What the heck is that?

Peaberry is a reference to a bean grade given to beans that are small and rounded. Peaberry’s occur in about 5% of any given crop of coffee. It’s a deformity of the cherry. Instead of the cherry having two halves, it has one rounded seed.

The distinction of this variety is a little vague at the moment compared to it’s non Peaberry counterpart and a definitive falvour difference can seem somewhat esoteric.

I’ve actually come to the conclusion that the difference is only minor. But of course, when you compare it to a much larger bean grading, then you’ll likely taste the difference more clearly.

The difference for me has always been noticeable in the acidity.

The correct pronounciation for this varietal is ‘Boor- Bone’. Bourbon is commonly grown in many central and east African countries. It’s original habitat was Île Bourbon (an island in the Indian Ocean, east of Madagascar, now known as Réunion). The French brought it from Yemen to the island of Reunion. They are susceptible to all major diseases and pests, making it more difficult to maintain for farmers.[Source- www.scaa.org]

You’ll come across different sub varieties of Bourbon at some point in time if you haven’t already. They’ll have different flavour characteristics, as you can imagine. In this case, you’ll find the red variety to be the most prolific in Central and East Africa.

Bourbon has such versatility from a roasters perspective, but also through brewing.

Bourbon’s clarity in the cup, granted processing is performed properly, allows you to experience any dramatic changes you might make in the brewing process more efficiently.

In other words- if you decide to change up the brew water temperature to modulate the acids, it will be easier for you to assess and enjoy the results.

Stay tuned for a varietal ranking which I’ll post at some point soon.

A rare grading, superior genetics, optimum terroir and immaculate processing make this coffee a pleasure to work with. We have more Rwandan Coffees already en route to Cape Town, so keep your eyes peeled for these Red Bourbon treats.