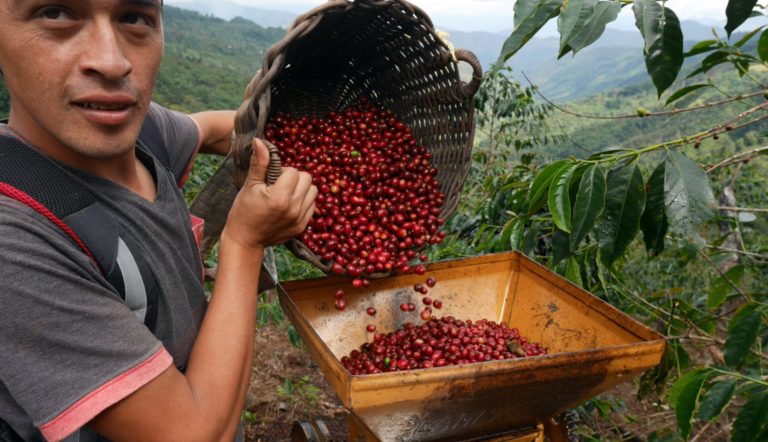 The Ancestors of the Amazonas region in Peru have farmed coffee there for more than 200 years. Their knowledge of Coffee farming is extensive to say the least. Their methods seem to be focused on being respectful to nature while maintaining yields, and today, the primary source of income for many living in this region is the production of Arabica coffee.

The bombardment of pests and diseases brought about by climate change has made it very difficult to transfer the enthusiasm and drive from the last generation to the next. By shifting their focus to the specialty market, PROCECAM hopes to ensure a future for coffee and the families involved for many years to come.

The name of the organisation (PROCECAM) stands for the ‘Coffee Producer Commercial Exporter of Andes Amazonicos Coffee’. However organisation sells their coffee under the name ‘Andes Amazonicos’, descriptive of the area in which the members are located. Members’ farms lie in a section of forest that divides the highlands and the jungle, just along the Marañón River – the principle source of the Amazon.

Farmers throughout the Amazonas region have large plots of well-matured Typica trees, some of which are more than 80 years old. PROCECAM leaders want to make sure that this strong genetic line isn’t lost forever, so they are teaching their members to establish nurseries using some of the finest of these ancestral seeds. Collection of Caturra and Pache are also underway, as well as experimental plantings of Geisha and other varieties in an attempt to contribute to the long-term sustainability of both the farmer and the cooperative. They plan to have these new varieties planted at various altitudes and closely analyzed to assess their potential at each level of elevation.

Caturra- Originally discovered in Minas Gerais, Brazil as a natural mutation of the Bourbon variety. It is considered a “dwarf bourbon” because it is shorter, has more secondary branches than Bourbon and the branch points are closely spaced. It’s this characteristic that confers it higher productivity levels as it can produce  more cherries in the same space and trees can be grown closer to each other.

Typica- The genetic backbone of a great deal of the specialty coffee industry. The first coffee plantations grown in America and Asia were of the Typica variety and many of the most widely cultivated Arabica crops today are descended directly from this variety.

From the farm side-organic, healthy soils, with an awesome genetic lineage. Understanding that Peru has 28 distinctive micro-climates, I recommend analyzing and enjoying Peruvian coffee like this now, so that you can start building on your sensory memory data bank, I suspect this won’t be the last we’ll be getting from Peru. Keep your eyes peeled and be sure to follow us on social media to stay updated.

In the cup expect- Vanilla, plum and honeybush tea, with a gentle papaya-like acidity, complimented by a velvety texture.