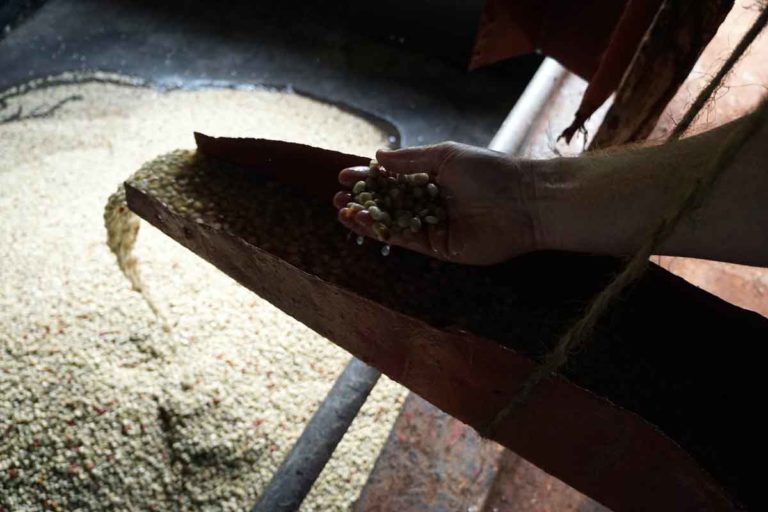 This AB lot was produced by numerous smallholder farmers, all of whom are members of the Ritho Farmers Cooperative Society (FCS) delivering to Handege Coffee Factory (as washing stations/wet mills are called in Kenya). The factory is located around 5 km from Gatundu town, in Kenya’s Kiambu County. The name “Handege” is derived from Ndege, the Swahili word for aeroplane or bird. We aren’t quite sure why that connection has been made, but it is certainly appropriate, as we expect this delicious coffee to FLY out of our warehouse.

Part of the success of Ritho can be attributed to the good management of the group. In 2010, confronting low coffee prices and other challenges, the group developed a strategic plan with the primary aim of increasing coffee quality (not necessarily quantity, as is so often the focus in these situations). Focus was also put on agricultural and organisational management and infrastructure. Today the results of these efforts can be seen in the exceptional cup quality of their coffee.

Processing at the Handege wet mill adheres to stringent quality-driven methods as a result of these earlier efforts. All coffee cherries are handpicked and are delivered to the mill the same day, where they undergo meticulous sorting. Factory employees oversee the process and any underripe or damaged cherries will not be accepted by the ‘Cherry Clerk’ – one of the most important harvest-period staff, who keeps meticulous records of how much coffee each producer delivers on any given day. Any rejected coffee will have to be taken home again, and the farmer will need to find a place to dry it (often a tarp in the yard) to be delivered only at the end of the season as low quality ‘Mbuni’ – natural process coffee that earns a very low price. Thus, farmer members are incentivised to only pick and deliver the ripest cherry that they can.

The treat of urbanisation and industrialisation

Kiambu, being very close to Nairobi, has a long history with regards to coffee production. However, recent history and urbanisation pose many issues for the future of coffee production in the region. Some of the issues are the same that farmers across the country face, such as low production due to pests and diseases and the relatively high cost of inputs compared to income from coffee. Many cannot afford to plant disease-resistant varieties and face being priced out of the market as their yields diminish.

The most pressing threat is arguably that of urbanisation and industrialisation. Kiambu County abuts directly up to the northern boundaries of Nairobi, encompassing wealthy suburbs and industrial areas alike in its southern edges. As the expansion of the Thika Superhighway and other infrastructure projects advance, it becomes easier and easier to set up businesses (and homes) on the outskirts of Nairobi, more deeply penetrating Kiambu’s borders. The highway construction has already led to an explosion of the real estate market with several big projects under development, such as Tatu City, Thika Greens and Buffalo Hills complexes. Other modern housing developments include Bahati Ridges, Fourways Junction and Juja South schemes.

Such urban expansion has already eaten away at many of Kenya’s larger coffee plantations: many of the oldest and largest are now housing developments. The impact on small holder farmers – who currently live farther from the city’s bounds – remains to be seen. Partible inheritance, where the property is apportioned among heirs, has caused landholdings to diminish over time, and with only 200 trees or fewer, many young people just don’t see the viability of coffee production.

One thing is sure: continued investment in quality coffee (such as this lot) is one of the sure actions that will give coffee in the region a ‘leg up’, hopefully preserving coffee in the area for generations to come.

In the cup expect litchi, rose wine and black tea flavours with a viscous body. This versatile coffee is best suited to Aeropress, espresso and Siphon. Enjoy a cup at Origin in De Waterkant and Bree. Grab a bag of beans for your home or office. View our full coffee offering here.