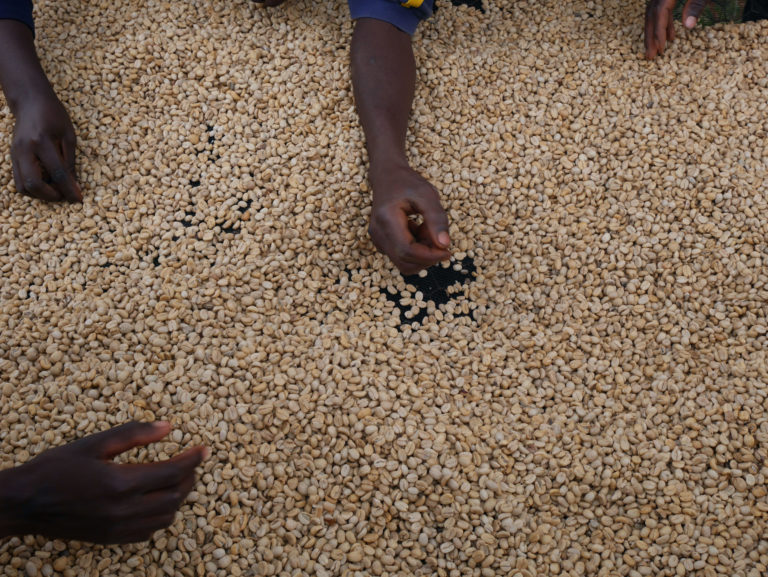 This lot was produced by numerous smallholder farmers who are members of the Kimaratia Farmers Cooperative Society (FCS) who deliver to Gitare Coffee Factory. Coffee Factory is a common name for Wet Mill or Washing station in Kenya – a processing area dedicated to removing the fruit to get to the seed so that it can be prepared for storage and export.

Kiambu is situated near to Nairobi and has a long history with coffee production. However, recent history and the urbanization process pose many issues for the future of coffee production in the region.

Most of these issues are related to low production due to pests and diseases. Farmers are now being forced to introduce resistant varieties in the face of these challenges, but the reality is that many cannot afford to plant disease resistant varieties and face being priced out of the market as their yields diminish.

Below is a description of the many varieties of Gitare. You’ll also find these varieties in our previous release- Kenya CRI Rukera AB.

SL 28 has become ubiquitous throughout Kenya and is recognized as a variety of exceptional cup quality. The beans appear to be wider than usual and the plant itself has a lower yield than some others. Scott Labs supposedly crossed mutations of French Mission, Mocha and Yemen Typica to produce the SL 28 variety- but this is not certain. The idea by Scott labs was to create a plant with high cup quality, adequate productivity and excellent drought resistance. SL28 is arguably the defining variety in Kenyan coffee.

SL34 –  A mutation of French Mission and is widely grown throughout Kenya. It’s valued for its high productivity in different climate conditions and great height ranges. It is also claimed to be resistant towards draught and strong rainfall. Perceived as having lower cup quality than SL28, but still contributes greatly towards a favourable cup-profile.

K7- K7 cultivar was selected from the French Mission variety for it’s resistance to some races of Coffee leaf rust(CLR) as well as partial resistance to Coffee Berry disease(CBD). It is suited for lower altitudes where CLR is prevalent. Cup quality is good.

Ruiru 11 – is named for the station at Ruiru, Kenya where it was developed in the ’70s. A dwarf hybrid cultivar produced by hand pollination and like almost all other hybrids, it was created based on need for pest and pathogen resistance. It is a cross between Catimor and multiple coffee berry disease resistant varieties, including K7, Rume Sudan(an Ethiopian heirloom variety), and SL28.

Batian -Released in late 2010, this disease resistant strain is named after the highest peak on Mt. Kenya. In Kenya, breeding work specifically for disease resistance in coffee started in 1971, after the 1960s outbreak of Coffee Berry Disease and coffee leaf rust. The main breeding goal since has been to develop cultivars that combine resistance to diseases with improved yields and cup quality. In 1985, the first disease resistant hybrid cultivar, Ruiru 11, was released. Further research and development by the Kenya Coffee Research Institute (CRI) has culminated in the release of Batian. Much like Ruiri 11, it has somewhat of a convoluted yet promising genetic background.

A good choice as an introductory Kenyan coffee, particularly so for those who are not fond of high acidity levels.

In the cup- expect custard, raspberry and passion fruit with a lovely tart, berry- like acidity. Seems to work best in metal filtered brews as well as Siphons (using the traditional cloth filter).