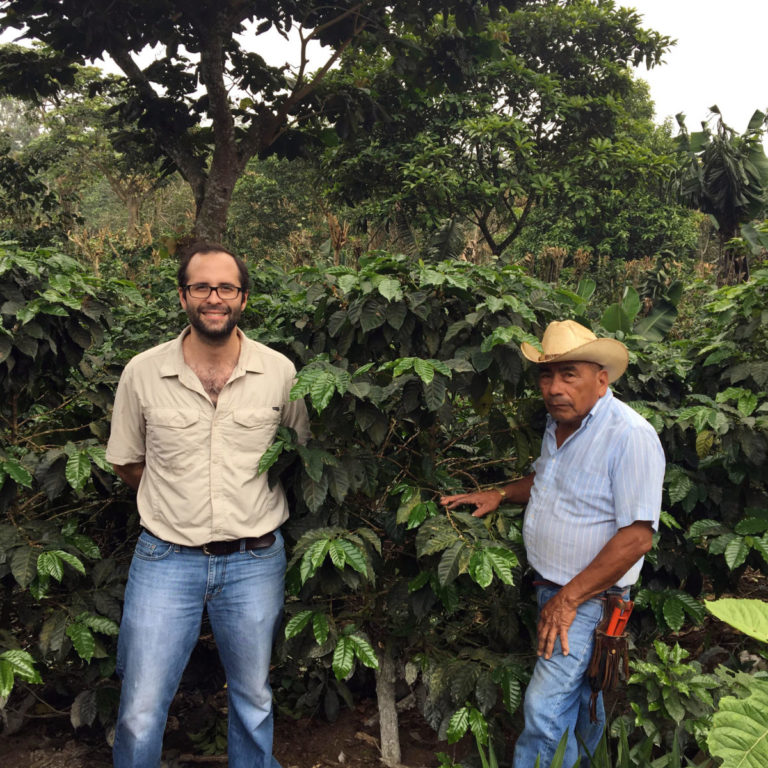 Finca Monte Urales was named after the Ural Mountains in Russia, due to it’s great elevation. It’s been in the family since 1969 and between Rolando the elder and the younger, the farm benefits from more than 40 years of experience farming coffee.

Pacas is a natural mutation of Bourbon, similar to Caturra in Brazil and Villa Sarchi in Costa Rica. Similar to other widely cultivated Bourbon mutants, Pacas has a single-gene mutation that causes the plant to grow smaller (dwarfism). This is it’s chief virtue: the plant’s small size leads to higher potential yields and the possibility of placing plants closer together to increase total fruit production on a farm.

The variety was discovered in 1949 on a farm owned by the Pacas family in the Santa Ana region of El Salvador. In 1960, the Salvadoran Institute for Coffee Research (ISIC) began a program of pedigree selection (selection of individual plants through successive generations) for Pacas. It is still widely grown in the country; it accounts for about 25% of the country’s coffee production. Source- www.worldcoffeeresearch.org

This Pacas lot has been kept separate for Natural processing. All Naturals on the farm are first hand sorted to ensure that all under ripe or damaged cherries are removed. This helps create clearer cup with more flavour distinction.

The cherries are then thinly spread on raised beds – normally with one layer in the beginning to ensure even drying. Drying is slow, with shade cover being rolled out over the beds during the hottest parts of the day. As they dry, cherries are regularly turned and sorted to remove any damaged cherries that may have been missed. Total drying time usually is between 20 and 26 days, depending on climatic conditions.

Monte Urales has already established a nursery with Kenya and Pacamara seedlings for planting out in the coming year. The farm is also currently experimenting with new processing techniques, particularly with regards to fermentation. So we are likely going to see more interesting happenings in the years to come.

Soil analysis and the environment

Four annual fertilisations are conducted, always with reference to soil and foliar analysis*. An important step in tracking quality potential. As you can imagine soil health and composition are important to allow the varieties to uptake more nutrients which can become flavour precursors.

*Foliar analysis can be a convenient and cost-effective method for evaluating the nutrient status of forested sites. It provides an index of the amount of nutrients actually taken up by the tree and, as such, is based on the concept that the tree, not the soil, may be the best indicator of soil nutrient availability.

Environmental stewardship is of the utmost importance to Finca Monte Urales. Coffee here is 100% shade grown in the attempt to preserve and encourage wildlife and to help mitigate the effects the continuing global warming crisis. The farm has also recently launched an extensive program of ‘micro-terracing’ in order to prevent soil erosion – It’s pretty important if you consider where they are. Water conservation is also of great concern, and the farm takes steps to preserve local aquifers.

In the cup, expect wine gums, black grape and star anise. An unsuspected Pourover champion. Also try as an Aeropress or Espresso extraction.