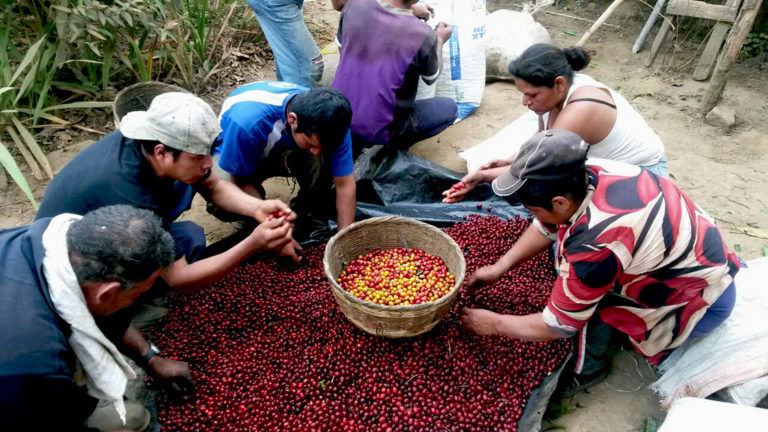 Finca El Aguila is owned by Mauricio Ariz and his sons – 4th and 5th generation coffee farmers. The finca occupies 63 hectares very near, just north of the Santa Ana volcano. 43 of these hectares are given over to coffee: the remaining 20 hectares are dedicated to nature conservation or have been planted with cypress trees.

The Ariz family are committed to keeping the primary forest within the property untouched. The family also supports the Ojo de Agua community with workers and materials to maintain two access roads, as well as providing a water supply to the community from their water reservoirs. It is hoped that the coming years they will be able to facilitate access to electricity for the community, as well.

Red Bourbon grown in El Salvador is quite a bit different to Red Bourbon grown in Africa. It’s certainly less acidic and fruity overall. Sweetness associated sugar caramelization by-products tend to come to the surface more via roasting. Expect to experience more of those dessert like characteristics.

This is of course- my opinion, your results may vary.

Today in Latin America, Bourbon itself has largely been replaced by varieties that have descended from it, notably Caturra, Catuai, and Mundo Novo. However Bourbon is still being cultivated somewhat prolifically in El Salvador, Guatemala, Honduras, and Peru.

El Salvadors highest and most active volcano- Santa Ana (also known as Ilamatepec) is a stratovolcano built up of alternate layers of lava and ash about 45 km west of San Salvador city. It is El Salvador’s highest volcano and one of its most active. In 1722 Santa Ana produced a lava flow that traveled 13 km to the east. One can deduce that Santa Ana has created the optimum soil environment for coffee farmers to flourish.

In the cup, expect- Smooth with a brown sugar sweetness, fresh dates, cinnamon. Most suitable in pressurized brew methods.