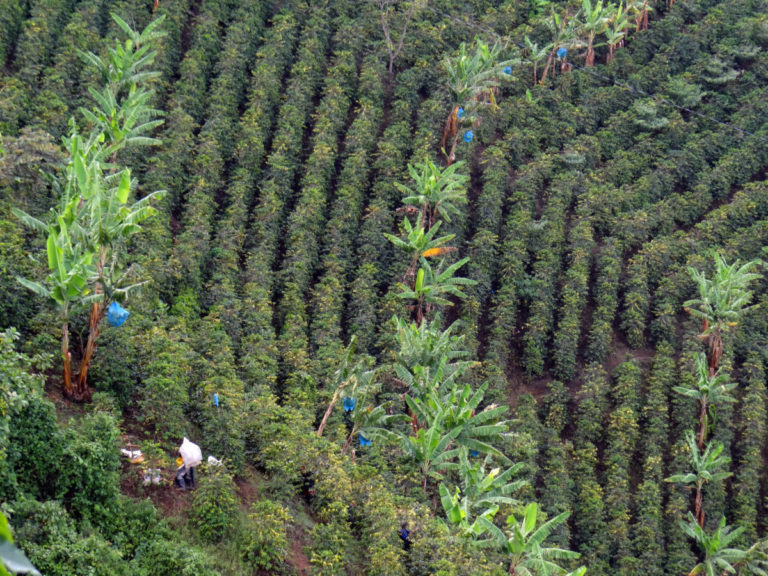 A Look at the Specs

Finca El Nivel was owned by Sr. Joel Ruiz for more than 30 years. Towards the end of his tenure, however, Don Joel left the farm somewhat under-attended due to health problems that his wife was having. Don Joel’s son, decided to return from Pereira to work on the farm to attempt to recuperate and repair the damage that had been done. However, with too few resources and lack of experience it was very difficult to get the farm back on track.

In 2013 Pierre Dumont (cofounder of Flor de Apía SAS) who had already been working in the coffee industry for several years and who had recently acquired a neighbouring property (Finca Barcelona), decided to buy El Nivel. From that moment, he and his business partner, Mario Alexander, began the work of renovating and recovering coffee lots on the farm.

The recovery process of the coffee production system of El Nivel has been carried out by implementing new production practices, which have made it possible to obtain high quality coffee. Considering that the El Nivel farm was acquired in 2013 and that a great deal of work still needs to be done, a Five-Year Production Recovery and Stabilisation Plan has been structured that addresses a total of 5 lots.

Flor de Apía S.A.S owns a wet mill locally, that works to conserve the quality of the coffee, every step of the way. The company’s mill has their top of the line facilities at Finca Barcelona, just across the road from El Nivel. During the harvest seasons, every day coffee is collected there and moved in the afternoon to the mill. When the coffee reaches the mill, it is sorted by the machines, then pulped and fermented.

Flor de Apía was established in 2010 by Mario Alexander and his then business partner (who retired early in the partnership). Mario however, was still committed and he approached his ex partners best friend of his ex-partner, Pierre Dumont. Pierre was looking for a change, and he agreed with Mario that there was more opportunity for importing green coffee. A plan was born. The pair purchased two neighbouring farms, Finca Barcelona and El Nivel and established a wet and dry mill at Barcelona. In addition to processing, roasting and exporting their own coffees, Flor de Apía buys cherry and wet coffee from 28 farmers in the municipality.

In the cup expect caramel, litchi and blackcurrant with a tart apple acidity. This coffee is best suited for Siphon, Pourover and Espresso.