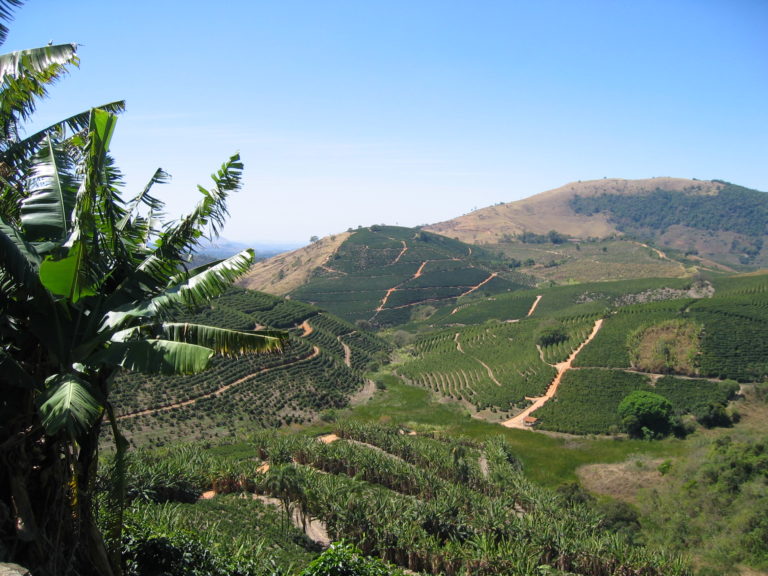 We were able to purchase two different varieties from Fazenda Passeio to taste side by side. Bourbon and Icatu. They are both Natural Processed coffees. In this style, processing flavour is generally highlighted, whereas with washed coffees genetic traits can be more easily identified. Nonetheless we wanted to know what the difference is.

I was fortunate to be able to visit Fazenda Passeio on my trip to Brazil last year October. The Bourbon variety was introduced to Brazil around 1860, and from there rapidly spread north into other parts of South and Central America. Bourbons will taste different depending on where it is grown.  African bourbons are generally more fruity and acidic. Central and South American bourbons seem to be less fruity and less acidic, with the cup showing an emphasis on more sweetness associated aroma compounds like chocolate, honey, marzipan, maple syrup, etc.

Bourbon is one of the highest quality varieties that I’ve ever encountered and is an absolute pleasure to roast and analyze as the different aspects of the cup-profile can be more clearly defined.

Icatú was first developed in Brazil and is known for its high productivity and good disease resistance. Originally developed in 1985, it was only officially released in 1993 by the Instituto Agronômico de Campinas (IAC) in Campinas Brazil and has become widespread within the country since that time.

Icatu has a bit of a complicated genetic lineage. It is an Arabica- Robusta hybrid back crossed with Mundo Novo and Caturra. Simply the word robusta is enough to make some specialty coffee enthusiasts shudder, but actually, hybrids like these are still classified as Arabica due to its chromosome count and various other features. Farmers are increasingly adopting the use of disease and pest resistant varieties  as climate change ensues. Fungal and insect pathogens like coffee leaf rust(CLR) and coffee berry disease (CBD) are two of the greatest afflictions farmers have to endure.

We haven’t had much experience with isolated Icatu, which is one of the reasons we bought these two varieties at the same time to taste side- by side.

What would you choose?

I’ll surprise you all and reveal that I actually prefer Icatu in this instance. This comparison has certainly reminded me to always keep an open mind. And of course, with coffee- I encourage you all to do the same.