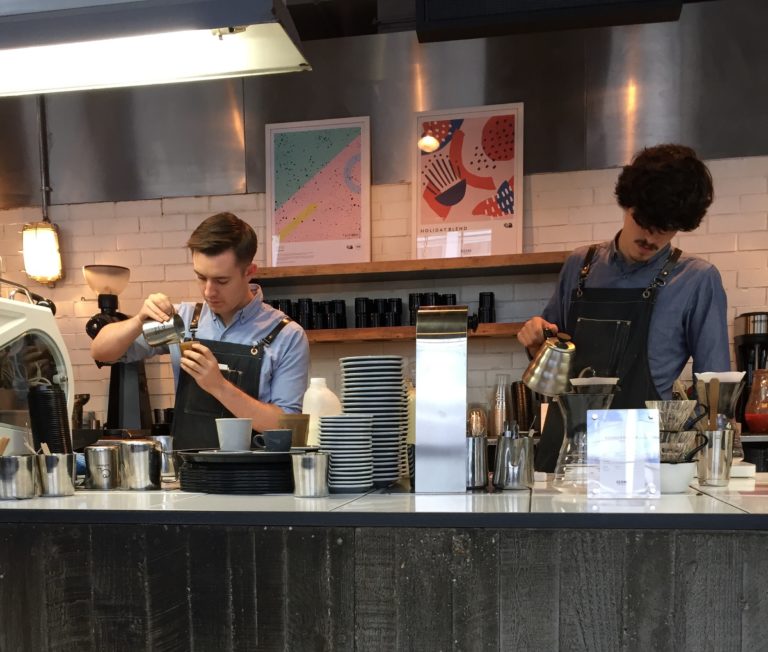 My overseas travel seems to have coincided with my coffee career. I embarked on my first trip abroad not long after starting my job as a barista at Origin in 2014. Since then I have been on 3 more trips, the most recent a trip to London UK. This was by far my most insightful. Partly because I have grown and learnt a lot more since that first trip but mainly because I was able to spend quality time on the opposite side of the bar as a regular customer and simply soak up the atmosphere and enjoy having a cup of coffee.

The first space I visited in the UK was Colonna & Smalls owned by the infamous Maxwell Colonna Dashwood. I had set my expectations very high and boy did this space deliver. The single bar is graced with a Mod Bar setup for espresso with pre-weighed doses of the single origin coffees on offer ready to be ground in an EK43. This espresso setup is separated from the brewing setup by the till and small pastries which are baked fresh and delivered every morning. The opposite end of the bar has 2 filter options, Siphon and Aeropress. Safe to say that this was some of the best coffee I had in the UK.

The Colonna & Smalls menu comprises of only the coffee origin options which are described in detail. After choosing a coffee customers can then decide whether they want filter or espresso. If filter which brewing method and if espresso, simply with or without milk. The knowledgeable baristas will guide you to your preferred size. Orders can also be done in the opposite way, to which the baristas would recommend a coffee based on the specified drink.

For a long time I have heard of Origin UK. And although there is no relation to Origin South Africa, I am not surprised that there tends to be confusion when they are as focused on quality from bean to cup as we are. I visited one of their smaller cafés in the trendy Shoreditch in London. Another very simple menu of black, white or filter with all the alternative milk options and other non-caffeine beverages. The feisty female barista was ever the professional, keeping the conversation going with me sitting at the bar whilst attending to other customers and still making coffees. I had a sweet and perfectly balanced flat white of their Ethiopian single origin offering. The milk was slightly cooler than our standard temperature in SA but this is how I actually prefer it!

One of my favourite spaces in London was Ozone Coffee Roasters. Also located in Shoreditch, I first visited when they were hosting the UK Aeropress Championships. This was a good opportunity to get to know some of the London coffee community however, I decided that I needed to return to experience the café on a “normal day.” I did exactly that the following day. Their service reminded me a lot of Origin. Great coffee and great food with the roastery on a separate floor (their roasting facility, overflow space and offices are located in their basement).

Their coffee bar is mainly white boasting a La Marzocco Strada as well as a Mazzer Robur and Nuova Simonelli Mythos grinder. Filter options are also the menu as well as coffee cocktails which I found very interesting. On my first return I had a pourover and on the second an aeropress as well as a cold brew Negroni cocktail (bear in mind I visited after 17:00 and did not have the cocktail at 10 in the morning). I did not have the chance to grab a bite to eat but based on the waiting time at the door I can only assume the food must be delicious.

The final café space I spent time at was Prufrock. I had heard a lot about this café and they have a reputation for both high quality coffee and an amazing training facility. I was met by Ewelina, Manager and Trainer at Prufrock as well as the runner up at the 2017 Polish Barista Championships. She showed me around and once she got back to her Monday morning admin I got a chance to sit at their bar, have a cup of coffee and observe. The space had a very relaxing and “homey” feel. This might be due to the fact that the diverse team working behind the bar (this included baristas from Taiwan, Netherlands, Poland, Australia and the UK) had a very good work ethic but also seemed like a small family. The energy definitely overflows onto the floor.

They had a big focus on automation and, although many people believe this makes less use of the baristas skills, work very productively with this allowing more time to focus on customer interaction. Of all the equipment they use I was most impressed by the temperature probe on their steam wand which measures the temperature of the milk while stretching and automatically stops at 55ᵒC. They also make use of an automatic milk dispenser which pours milk for drinks based on demand.

Reflecting on my time spent at these amazing coffee spaces I was surprised that I had found more similarities than differences between the South African and UK coffee industry. Coffee transcends many barriers and I found myself speaking the same language with these professionals despite the differences we experience. I look forward to more trips experiencing more coffee cultures and cafes all over the world.