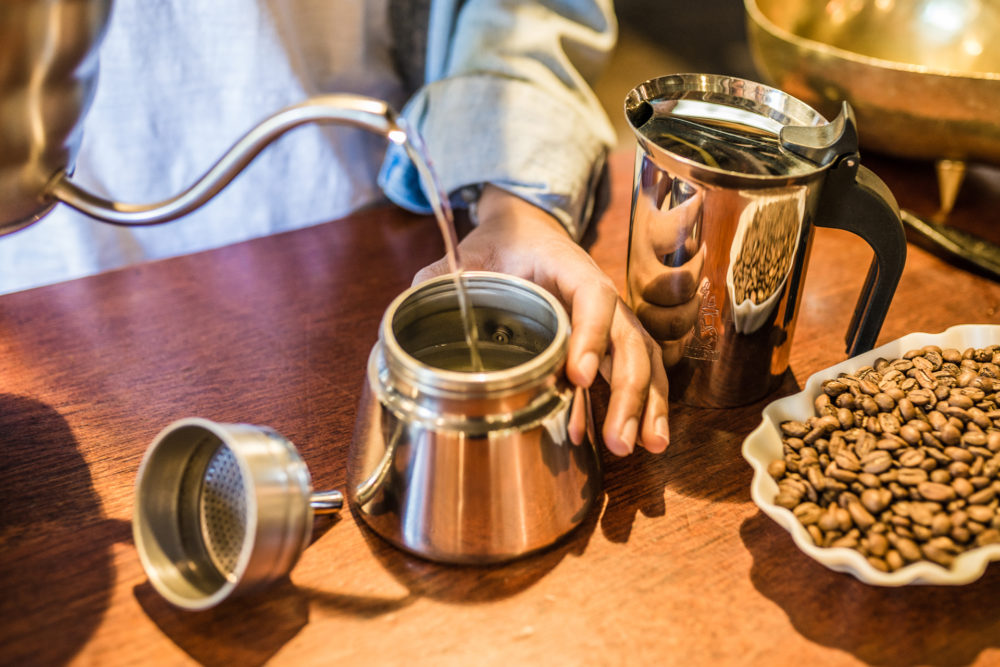 The Moka Pot is a stove-top coffee maker that brews coffee by passing boiling water pressurized by steam in a closed system through ground coffee. It’s named after the south western Yemenite city of Mocha which was the purported major marketplace for Coffea Arabica from the 15th to the early 18th century. It was invented by Luigi De Ponti. It was patented for the first time in Italy by an engineer named Alfonso Bialetti in 1933. Bialetti Industries continues to produce the same model under the name “Moka Express”. There have been various other models that have been brought out since.

What kind of brew are you getting with the Moka Pot?

There is a mechanism in coffee brewing called “Washout-kinetics” and this occurs with brews under more force. Imagine water being forced through some coffee grounds in a closed chamber of sorts (like an Aeropress, Espresso machine group head and of course the Moka Pot). This force erodes insolubles off the coffee grounds which are comprised of oils, bean fiber and protein. These components add body and texture to the brew. Washout-kinetics will also increase the rate of diffusion (extraction) allowing for shorter extraction times in which to achieve a complete cup profile.

The description and use of the term “washout-kinetics” seems to be used primarily in espresso, and rightfully so. (Washout-kinetics is elucidated in Ernesto Illy’s Co-written/edited work, Espresso — the science of quality).

Does the Mokapot produce an espresso?

Espresso brewing is a bit different to Moka Pot brewing in the sense that it will produce a heightened body and aroma profile because of the way it emulsifies the oils present in the coffee. Moka Pots simply cannot do this. 9-10 bars of pressure compared to somewhere around 1.5 bars for the Moka Pot is clearly a big difference which will reflect tin the cup. The result? A lower body and aroma profile and thus cannot be called Espresso.

The magical property of the oils in a brew

Regardless of the brew method, if you are using a porous filter that will allow a higher level of oils into the cup, they will be absorbing as layers of aromatic compounds cling to the brew colloids (oil molecules), holding it in the brew until the coffee is swallowed. (This is where retro-nasal aroma perception comes from). These brew colloids will break up when swallowed and the aroma molecules reach the olfactory receptors in the nose, where aroma is perceived as taste (this mechanic is known as retro-diffusion).

The Moka Pot is unique in the sense that it has some of the attributes of espresso brewing albeit on a much lower level, but in a portable travel-friendly design. If you wish to explore the textural properties of a coffee with enhanced aroma and don’t feel like getting involved with an espresso setup, this might be your go—to brewing device.