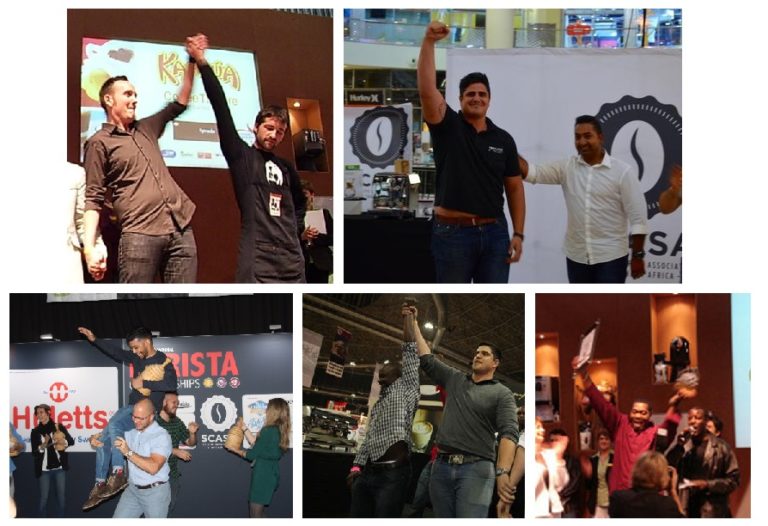 Winston is on his way to Seoul Korea to represent South Africa at the World Barista Championships in a couple of weeks’ time. We at Origin are all very excited to have him represent us, and Cape Town, South African and African coffee and all of our barista & coffee professionals. It’s given me an opportunity to reflect on how Winston and Origin ended up here, and how we can focus ourselves anew for the future.

I am sometimes asked how it is that we have managed to nurture five South African barista champions, and many other successful competitors over the years. Origin champions won national titles twice in the earliest years of our national barista competition, twice in the middle years, and again last year with Winston. I have given a lot of thought to the question, and a number of themes emerge.

Origin has, since day one, been striving to reach the standard of the best cafes in the world – in terms of roasting, in terms of barista skills and in terms of customer experience. We did not, particularly in the early days, reference what else was going on at the time in Cape Town / SA coffee, but rather the best that we knew of worldwide. I am not suggesting that we have yet reached that goal (and those standards get higher and higher all the time), but rather that our constant drive to get there is a key factor in our WBC journey. We keep challenging our ideas of what Cape Town / SA coffee and our best baristas can be.

From the very beginning we also had strong commitment to the baristas themselves. We recognized that one of the key limiting factors to what could be achieved here was the development of the barista as a skilled professional deserving of respect. To this end, we were early drivers in the establishment of SCASA and the SA barista championships. We have trained over 3,500 baristas at Origin, mostly for our wholesale customers, but including many who have passed through the Origin team itself. Training others in barista skills makes one a better barista and a better competitor. Winston is the current head of our barista academy with a focus on training our customers’ as well as our own baristas. I believe this role makes him a stronger barista professional and a better competitor.

At Origin we expect a lot from our baristas. We pay them substantially more than the market (and hopefully even more as the coffee consumer becomes more demanding…but cup prices have to increase to support that). We give them opportunities to learn, to take on more responsibility and to grow into bigger roles in our company. For those that push themselves hard, we invest further in their growth with initiatives like bringing Klaus Thomsen (a former WBC champion) to help train Willem as the first SA competitor at WBC,  sending our champions to compete (and win) at the African barista championships and giving our senior baristas the chance to travel and explore the best of coffee and cafes in other countries like Australia and the UK.

Sometimes it seemed that only those who were exceptionally self-motivated and driven to excel rose to the top of our team. There have fortunately been many who have gone there. But in a way maybe that tough-love aspect, the giving of responsibility, the availability of resources to those who grab them, and leaving it to the individual’s will to succeed, has been a factor in these champions’ success. That said, we are now investing a lot more in developing a more structured approach to skills development in our barista team. We are always searching for the next great barista to join our team and hopefully who will one day be the next South African champion. If you think you belong on our/his team, please speak to Winston.

We have had a very strong level of commitment to diversity, because of where I grew up – in proudly multicultural Canada and in particular Montreal with its unique cultural challenges. My father’s family were also immigrants in difficult circumstances, refugees from war, moving between countries. I believe our diversity creates a stronger team and stronger individuals. I am proud that our champions have included an Afrikaaner from Cape Town (Willem Piennar), an Angolan refugee (Jose Vilandy), an English speaking South African from Durban (Wayne Oberholzer), a Zimbabwean refugee (Lovejoy Chirambasukwa) and now a young and ambitious local man from Strand, Cape Town (Winston Thomas).

Finally, at Origin, we are a collective of individuals working together for our company’s and our individual success. It takes all of us to create a champion. Firstly we have to recognize the importance of our roasting team in producing coffees that can help win competitions. We have invested heavily over the years in the skills and experience our roasters Mike MacDonald and Jorge Alberto, including sending them to countries of origin (Brazil, Rwanda, Tanzania) to learn more about the producers and their challenges and to judge at Cup of Excellence to develop their tasting skills and knowledge. Our coffee sourcing partners Mercanta, who have worked with us to find so many competition winning coffees over the years. The many colleagues and friends of Origin who put so much time into helping our baristas with their training and preparing for competition. The hard-working team that helps make our café busy thereby giving our baristas the opportunity to pour a lot of coffee every day for a pretty demanding set of customers. The team behind the scenes that handles all the details that make running Origin possible. Our competitors stand on the shoulders of all those who came before – previous champions, the many trainers, roasters, baristas and other key people over the years at Origin, and so many others.

And last but not least we have to celebrate the extraordinary commitment of time and effort by each of our champions over the years to honing their craft. They have had to keep up their day jobs (to a reasonable level!) while preparing for regional, national and world competitions. I have watched them all from Willem through to Winston – working exceptionally hard to win. I, and many others with pretty informed opinions, think Winston is one of, if not the strongest national champion we have ever produced. We at Origin are behind him and have faith he will be the highest placed South African barista ever in World Competition.