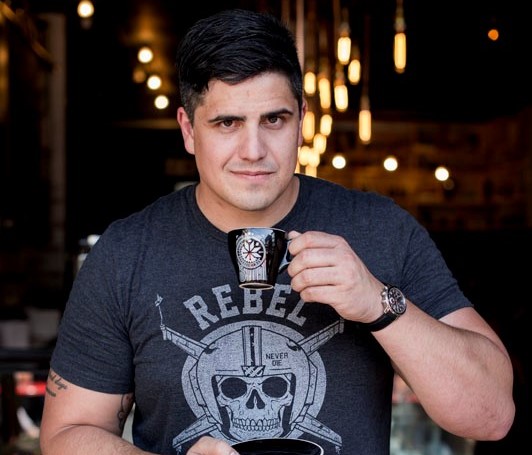 Wayne Oberholzer got his start in coffee 9 years ago as a way to pay for his commercial pilot’s license. Fast forward to today, Wayne has won SA Barista champs twice and gone on to represent South Africa twice at the World Barista Championships (WBC 2012 and 2016) and once at the World Cup Tasters Championship. “In 2008 I was asked to come on board with the guys at Colombo Coffee and tea. Currently I am the owner and Co-founder of The Portland Project.”

The coffee industry in South Africa is forever changing and growing, Wayne explains that “We have seen the rise and fall of some great names in the last ten years. Where most cafes and restaurants were using imported brands, we are seeing more and more chasing properly locally roasted coffee. We are seeing more coffee shops coming in that are focused purely on great coffee. However the consumer is still dazzled by such things as coffee in a cone and pink and purple frappes. But we are making great headway.” In his time in the industry Wayne has passed through Origin’s doors where he worked on the technical and sales side of coffee. He is still a regular at Origin De Waterkant and can often be seen enjoying pour over at the Brew Bar.

Wayne competed in the WBC in both 2012 (Vienna, Austria) and 2016 (Dublin, Ireland). “Wow they were some of the greatest times in my life. In 2012 I wasn’t aiming to actually win the National Barista Champs. I got into the comp as a way to become a better judge. It was a massive surprise to have won the Western Cape regionals. I then went on to win that year’s National title. The first win came as a massive shock. As such I don’t think I was mentally prepared for such a title. The impact of it on my workflow and life. But it was one of the greatest adventures of my life. The second win was mainly focused on building my fledgling company and advancing my skills. Both of them have been amazing for me. My knowledge and my experiences have really advanced because of them.”

Wayne’s first WBC was held in Vienna, Austria. At the time, Wayne was a part of the Origin team and representing both South Africa and Origin at the competition. As he recalls for the most part coffee in Vienna was very basic in terms of specialty coffee. Vienna is home to some of the oldest cafe’s in the world but still have some of the biggest Nespresso stores around. He went on to say that “there is also a sense of learning amongst the average coffee drinker there, so we have seen a lot of growth in the region since 2012.”

Last year, 2016, Wayne competed in his second WBC in Dublin, Ireland. “Ahh I was most excited for Ireland for a massive reason – 3FE. They have undoubtedly become the biggest driver of specialty coffee in the region. The general population has a pretty good understanding of good coffee. We did find a few people who maybe didn’t know much about coffee. But when you go to a shop like 3FE and see 10 minute queues and people waiting in the rain for a coffee. It gets people like us really excited.”

After his first WBC in 2012, while at Origin Wayne trained Lovejoy (SA Barista Champion 2013) who later trained current SA Barista Champion Winston Thomas. For WBC 2016 Winston (as SA AeroPress Champion at the time) was part of Wayne’s WBC team in Dublin. The exposure to international coffee and the knowledge that Winston gained as a member of Wayne’s team at WBC 2016 is in his words “what helped me to win at the SA Barista Championships 2017”.  Wayne and The Portland Project are one of Winston’s sponsors this year. With WBC 2017 fast approaching, Winston is well underway with his prep for the competition.

“Smooth is fast. You have this bud. Your passion has always been your biggest asset. Your meticulous nature will always be the ace you have up your sleeve. All the best brother!”