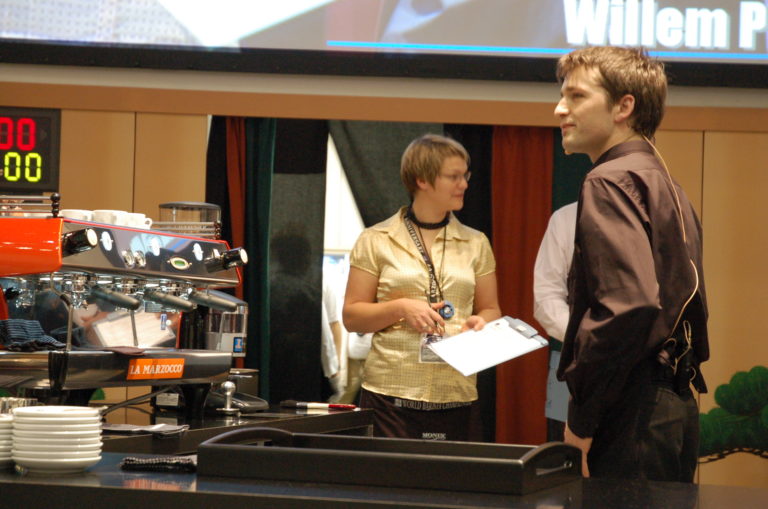 Willem Pienaar got his start in coffee 11 year ago at Origin. As he explains, “I was doing work on site installing the alarm in Origin HQ back before there even was a shop, met Joel and asked to take some coffee home. It was so different from what I had known before that I just kept asking questions about what they do until they had no choice but to hire me.”

Fast forward a year later, in 2007, South Africa sent their first competitor, Willem Pienaar, to the World Barista Championships (WBC) held in Japan. For Willem, this was the start because he got to see how big the world of coffee really was. He revealed that “being the first in something leaves you unprepared for reality when it comes around. I learned an incredible amount of lessons in a very short period of time”. At that time the coffee culture in Japan (and the world) was ahead of SA but Willem thinks “we have almost caught up and we are on the verge of making our own breakthrough into the world coffee scene. We are in the big leagues and we’re showing the world that SA is no longer a minor power in the coffee world.” From his experience with coffee in Japan Willem saw their immense pride, dedication to and passion for speciality and single origin coffees. This is mirrored in speciality coffee shops in South Africa.

Some of Japan’s must-visit coffee shops include About Life Coffee Brewers, Switch Coffee and The Roastery by Nozy Coffee. These 3 shops have something other than coffee in common. They are passionate about sharing their knowledge and are on the same mission as Origin – to grow everyone’s coffee knowledge and help people gain an appreciation for fine and speciality coffees. The best coffee roasters around the world, whether in South Africa or Japan, are obsessed with quality: from the farms around the world to green beans and finally the cup.

When Origin opened its doors there was no such thing as coffee culture in South Africa back then. Willem believes that we (Origin) greatly assisted in establishing the specialty coffee culture in South Africa. The whole notion of what coffee was and is has been flipped on its head and according to Willem “if you still don’t know what specialty coffee should taste like, you must be living under a rock”. The coffee industry in South Africa is growing at a rapid rate, with speciality stores popping up every month.

Willem went on to say that “The SA coffee culture has greatly matured in the last 10 years and we are very quickly coming to the point where SA will be a competitor to be reckoned with in the world champs, I’m looking at you Winston”. Winston Thomas will be representing both Origin and South Africa at the WBC this year in Seoul Korea as SA 2017 National Barista Champion. With the evolution of coffee culture in SA, competitors now have access to more than ever before. From roasters to former world champions the coffee industry is always ready to lend a hand and coach one of their own.

“Winston, you already have what it takes to go all the way. You are currently the single best barista, showman, professional that I know. I would wish you good luck, but you don’t need luck. You are going to kick some serious a** and I am proud to call you a colleague.” – Willem Pienaar