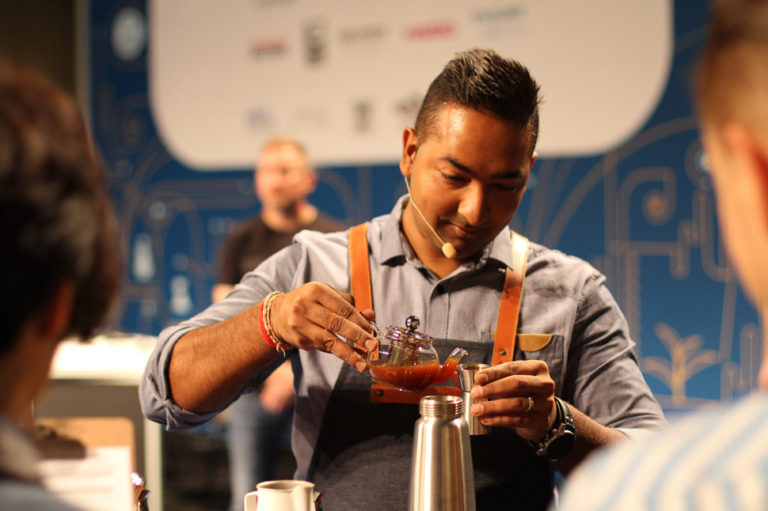 Ishan Natalie got his start in coffee 16 years ago, “I was in my first year of University on a journey to become an accountant and grew up in my dad’s business. Growing up in the business and getting out more into the general world, I wanted independence from the family business and to avoid strain on my relationship with my dad, looked for a new way to earn cash for daily expenses on campus. I was hired as a waiter for the Woolworths Café in Gateway, Durban. I wasn’t the best of waiters and was pulled off the floor from time to time by my manager at the time to assist behind the bar. The manager at the time was actually the co-founder and director of TriBeCa, Dale Mazon, who had immense experience and skill as a barista growing up in Seattle and working for Starbucks. He taught me and inspired me to be the best barista. I fell completely in love with the craft and chose to make this a career rather than an accountant.” The change from accounting to coffee was the right choice for Ishan, to date he has been crowned SA Barista Champion three times. From Barista to Ops Services Manager, from TriBeCa to Starbucks Ishan has definitely made his mark on SA’s coffee industry.

Ishan’s first represented SA at World Barista Championships (WBC) in 2009 in the USA. As he recalls “[I was] very inexperienced and young. The championship was in Atlanta so it was my first trip to the US which was great to experience. The competition was tough being so young and inexperienced, but it started my journey into understanding the expectation of a barista champion. I loved the comradery of all the baristas – everyone is ready and available to assist in any way.” Fast forward 6 years, Ishan travelled back to the USA to represent SA again at the WBC. This time with a few more years or experience and his third SA Barista Championship win under his belt Ishan was more prepared to take on the competition.

“WBC 2015 in Seattle was a totally different ball game! I was a lot more mature as a person and barista competitor. My outlook on everything was very different to the past WBCs. This time, I didn’t feel intimidated by anyone and I felt like a World Champion. I worked much harder towards this championship and believed I was in the prime of my championship career. I also had a much better and stronger support structure in place. I also travelled with a team of SA coffee ambassadors and friends this time, building more confidence in me – Craig Charity, Matt Carter, Donovan McLagan and Melanie Winter. By this time, I also had a lot of coffee friendships that I developed internationally and on the trip, as well as some local coffee friend and industry people that travelled separately to the show that supported me from the crowd. This boosted my confidence more as well. The coffee I took this time was quite expensive and rare, with an amazing story/ history and for the first time, I had a direct link to the farmer and a presentation centred around a rolling theme rather than a coffee story from bean to cup. In my head I believed I had everything to win and I believe I could have, however my coffee did not react the same in Seattle as it did back home. So, everything had to change every day up until the last moments before stage – grind, dose, extraction and signature beverage as a whole. That was stressful, but I went on stage confident and with the belief that I had a power set and coffee. The feedback from 2015 was invaluable. I was recognised by a lot of international coffee ambassadors and judges as a worthy competitor and this made this the best experience for me.”

The USA are one of the powerhouses when it comes to coffee culture. In SA we are able to source, roast and cup great coffee now and we are on par with the USA in term of quality. In terms of quantity, according to Ishan, the sheer number of coffee spots and diversity of brands in the USA sets them apart from SA. From his experience Ishan explains that “In terms of coffee quality, I was ‘wowed’ by only a few and most made me realise that we are on par with skills and cup profiles.” He went on to explain that “Sometimes it’s the romance of where we are that determines our experiences and perceptions, sometimes it’s that extra care and attention to every aspect that leads to the cup you savour.”

Ishan traveled to many coffee spots in the USA on his way to the WBC. “My favourites were Intelligentsia, Blue Bottle, Café Grumpy, Slate Coffee Roasters, Stumptown and the Starbucks Reserve Roastery and Tasting Room. Every brand with its own unique personality, baristas personalities and coffee personalities. I would recommend all of them.” Like Origin all of these roasteries pride themselves on the quality of their coffee, from sourcing the best green beans to skilfully roasting every batch to perfection to each of the professional baristas that pour perfect cups.

In 2012 Ishan competed at the WBC in London, “My London WBC experience was very similar to Atlanta, I was still too inexperienced as an international competitor.” He explained that “my feelings about the UK are identical to the US, except I felt that I had and enjoyed more experiences in the UK. The UK has the largest coffee culture and growth per capita if I am not mistaken. I also felt that there was more humility in more UK coffee professionals and coffee spots.” Again, while on his way to the championship Ishan immersed himself in UK coffee shops. “My recommendations and best experiences were: Prufrock, Tap, Ozone (my favourite space in the world of coffee) and Starbucks Reserve.” 2017 SA Barista Champion Winston Thomas made his way to the UK earlier this month, in preparation for WBC 2017.  He too immersed himself in UK’s coffee culture, also visiting Prufrock and Ozone.

Looking back on his three WBC experiences, Ishan gained experience and confidence in his own abilities from each competition. “The more I did competitions, the more I learnt from every experience, learning from each missed opportunities and working harder on my celebrations to grow. It’s a matter of time, awareness of areas of opportunity and humility to accept criticism towards improving one’s self. It’s also above sometimes moving out of your comfort zone to challenge yourself. With every competition came, gained experience, maturity, more confidence, more belief and stronger relationships.  It just got better and somewhat easier, yet always challenging as I progressed from one competition to another. My goal has always been to beat myself, looking back at past performances and scores, and working hard to better them with each competition.”

After 16 years in the SA coffee industry Ishan is considered by many to be a great influence and inspiration. He has made his way from barista behind the machine to a business savvy coffee professional. His experience in both the WBC and the coffee industry makes his a great source for a few words of wisdom for this year’s champ Winston:

“Winston came to see me a few months ago, shortly after his win to chat. My advice to him was and will always be that there is something special about him; a humility and respectable demeanour that he must never change. He must just be himself, take the advice from whoever offers but not to change to what someone else believes. He must remain himself and true to his beliefs, and filter what can benefit him to succeed.”