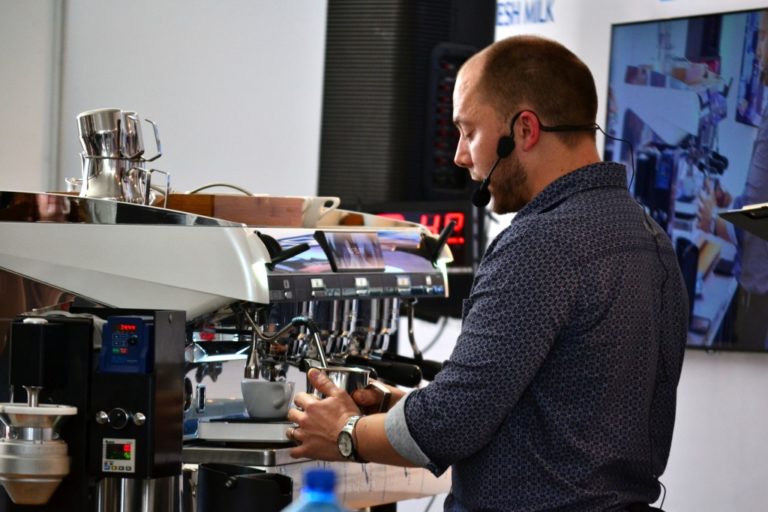 Craig got his start in coffee about 9 years, “A friend got me into making coffee in a Moka pot, I loved the process of it and started experimenting with various ways of making it to get a better coffee”. From there Craig repaired a 1 group commercial coffee machine and together with a friend started the coffee company Go Coffee. Looking back now “I would never had guessed that coffee could be this complex 9 years ago” says Craig.

In 2014 Craig won SA Barista Champs and his journey to WBC began. According to Craig the journey was “the craziest time of my life”. He went on to explain “Although winning the SA champs was a dream of mine, I did not think further than the actual competition. The road to WBC Rimini was the most eventful time of my life. I went to Burundi for the African Champs and pawned it, I went over 17 Minutes and got disqualified. I think that at that point I realized that I needed a team around me and that I was only as strong as the team”.

Craig explains that the coffee culture in Italy is very similar to the coffee culture in SA, the difference being that Italy has a lot more coffee drinkers. He believes that with more coffee drinkers the industry can change quicker. “I enjoyed the coffee there, it is different, darker roasted, most of it has Robusta in it but you cannot judge suit on what we consider a ‘good’ coffee. I appreciated it for what is was” says Craig.

The best cup Craig drank in Italy was from Ditta Artigianale, a café in Florence. The café was opened in 2013 by Francesco Sanapo, who was Italy’s 2013 Barista Champ. He competed at the WBC and placed 6th in the world finals. Ditta Artigianale focuses on quality, craftmanship and the coffee culture. Like Origin, Ditta Artigianale travel to various coffee farms and build direct relationships with coffee farmers.

The day that Craig has been preparing for, WBC 2014, arrived and he remembers “I had an amazing team with me and even through my stuff did not arrive till 4 hours before I had to be on stage the people around me picked up the slack and I was able to go on stage and do well”. Craig placed 15th, higher than any SA competitor before or after him. Currently, Craig is part of Winston Thomas’ (2017 SA Barista Champ) WBC team, he is one of Winston’s coaches. The two just returned from London, where they spent two weeks exploring the coffee culture and coffee industry.

“Practice as if this is the last time you will ever be able to be on stage, when on stage perform as if you have never practiced.”